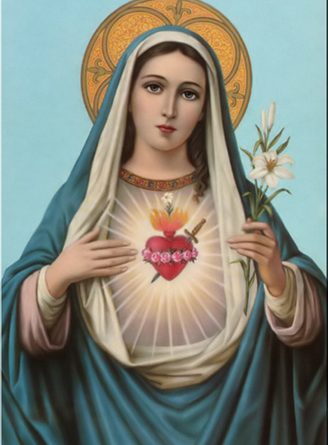 One of the greatest means of salvation and one of the surest signs of predestination, is unquestionably, the devotion to the Most Blessed Virgin. All the holy doctors of the Church are unanimous in saying with St. Alphonsus of Liguori: “A devout servant of Mary shall never perish.” The chief thing is to persevere faithfully till death in this devotion.
.
Numerous examples show how agreeable the three Hail Marys Devotion is to the Divine Mother and what special graces it draws, during life and at the hour of death, on those who never omit it for a single day.
.
This practice was revealed to St. Melchtilde (13th century) while she was beseeching Our Blessed Mother to assist her in her hour of death. Our Lady appeared to her and said: “I will, certainly. But I also want you to say three special Hail Marys to me every day.
.
“The first will be in honor of God the Father, Whose omnipotence raised my soul so high above every other creature that after God I have the greatest power in heaven and on earth. In the hour of your death I will use that power of God the Father to keep any hostile power far from you.
.
“The second Hail Mary will be said in honor of the Son of God Who communicated His inscrutable wisdom to me. In the hour of your death I will fill your soul with the light of that wisdom so that all the darkness of ignorance and error will be dispelled.
.
“The third Hail Mary will be in honor of God the Holy Ghost Who filled my soul with the sweetness of His love and tenderness and mercy. In your last hour I will then change the bitterness of death into divine sweetness and delight.”
.
Our Blessed Mother also revealed to St. Gertrude the Great: “To any soul who faithfully prays the Three Hail Marys, I will appear at the hour of death in a splendor so extraordinary that it will fill the soul with heavenly consolation.”
.
St. Leonard of Port Maurice, the celebrated missionary, had the Three Hail Marys recited morning and evening in honor of Mary Immaculate, to obtain the grace of avoiding all mortal sins during the day or night; moreover he promised in a special manner eternal salvation to all those who proved constantly faithful to this practice. He gave this devotion of Three Hail Marys as a penance in the confessional, especially for those who were struggling with sins of impurity.
.
Practice: Recite morning and evening, three Hail Marys in honor of the three great privileges bestowed upon Our Blessed Mother by the most Blessed Trinity with this invocation at the end: for the morning: “O my Mother preserve me from mortal sin during this day.” For the evening: “O my Mother preserve me from mortal sin during this night.”
.
(Pope St. Pius X gave his Apostolic Blessing to this practice and the devotion was raised to an Archconfraternity by Pope Benedict XV.)
.
The Hail Mary: Hail Mary, full of grace; the Lord is with Thee: blessed art Thou amongst women and blessed is the Fruit of Thy womb, Jesus. Holy Mary, Mother of God, pray for us sinners now and at the hour of our death. Amen.
.
How the Devotion to the 3 Hail Mary’s saves a Sinner from being Killed by a Demon
.
In the year 1604, in a city in Belgium, there were two young students who gave themselves up to a life of debauchery instead of following their studies.