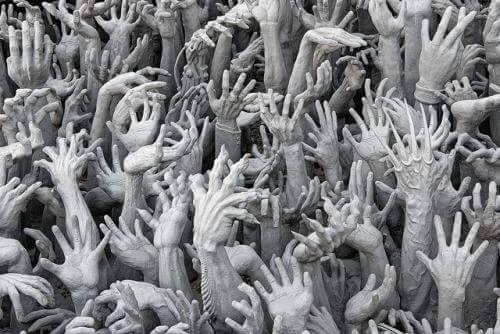 “A certain man,” says Ven. Bede, “fell sick and died in the beginning of the night. Next morning, early, he suddenly came to life again, and sat up. He told the people what he had seen. ‘I was led,’ he said, ‘into a dark place. When I came into it, the darkness grew so thick that I could see nothing but the form of him who led me. I saw a great many balls of black fire rising up out of a deep pit and falling back again. I saw that there were souls shut up in these balls of fire. The smell which came out of the pit was unbearable. He who led me into this place went away. So I stood there in great fright, not knowing what to do. All at once I heard behind me voices crying and lamenting most fearfully. I heard other voices mocking and laughing. These voices came nearer and nearer to me, and grew louder and louder. Then I saw that those who were laughing and rejoicing were devils. These devils were dragging along with them souls of men which were howling and lamenting. Amongst them I saw a man and a woman. The devils dragged these souls down into the pit, I could not hear their voices so well. After a while, some of these dark spirits came up again from the flaming pit. They ran forward and came round me. I was terribly frightened by their flaming eyes, and the stinking fire which came out of their mouths and nostrils. They seemed as if they would lay hold of me with burning tongs, which they held in their hands. I looked around me for help. Just then I saw something like a star shining in the darkness. The light came from him who had brought me into this place. When he came near, the devils went away. Then he said: ‘That fiery, stinking pit which you saw is the mouth of hell, and whosoever goes into it shall never come out again. Go back to your body and live among men again. Examine your actions well, and speak and behave so that you may be with the blessed in heaven.’ When he had said this, on a sudden, I found myself alive again amongst men.”