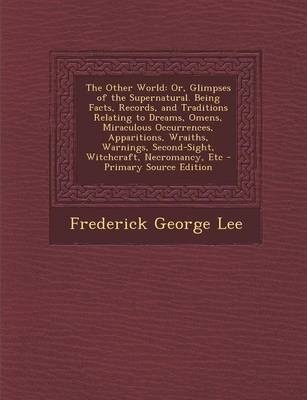 A: If that weren’t so, he would be able to speak out more. He is, as it were, paralyzed. He can no longer do very much; believe me, he can no longer do very much you will feel in your hearts what must be done. But, whatever else, in no way must you abandon the smallest scrap of the old faith. I want to say, I must say, that the Second Vatican Council was not very good. It was, in part, the work of Hell.

E: Tell the truth, in the name of the Most Holy Trinity!

A: There were a few small things, which needed to be changed, but most of it – no. Believe me! In the liturgy, there was practically nothing to be changed. Even the Gospel reading should not be in the vernacular; it would be better if the Holy Mass were said in Latin. The reason can be seen if you just look at the Consecration, only the Consecration, but that is typical. At the Consecration, one uses the words: “This is My Body which will be given up for you”, followed by: “This is My Blood, which will be shed for you and for a great number”. That is what Jesus said.

E: It is not correct to say “for all”? Tell the truth, in the name… you have no right to lie.

A: It certainly isn’t. The translations have not been completely accurate, and this is particularly the case with “for all”. It should not, and cannot, be “for all” – it should be “for a great number”.

When the text is not correct, so the abundance of graces diminishes; the channel of graces still flows, but only sparsely. And the Consecration is accompanied by so many graces when the priest does things correctly, according to the old Tradition, and according to the Will of God. For you and for a great number” must be said, just as Christ Himself said it.

E: But, didn’t Christ shed His Blood for all? Tell the truth in the name…!

A: No, He would have liked to shed it for all, but, in fact, it did not flow for all.

E: Because many have rejected it? Tell the truth in the name…!

A: The new order of the Mass – the bishops have changed the Tridentine Mass – the new Mass is absolutely not as They up there want it (he points upward). The point will soon be reached when the whole Mass will no longer be valid.

E: How is the Tridentine Mass, the old Mass, which was prescribed by Pope St. Pius V? Tell the truth, in the name… and you have no right to lie!

A: It is the best in existence; it is in the standard, the true, the good Mass (he groans).

E: Akabor, tell the truth, in the name of and by the order of, the Blessed Virgin! We order you to say everything she charges you to say!

A: I said all that against my will, but I was made to! She up there (He points upward) forced me (he mutters).

E: Is there anything more that you must say, in the name..! But speak only the truth!

A: Many priests make reference to obedience. But now, in these times, it is not necessary to obey modernist bishops. It is now the time of which Christ spoke: “There will rise up many false Christs and false prophets”

Those (modernist bishops) are the false prophets. But one ought not – nor has one the right – to believe them. Soon, one will no longer be able to believe them, because they… because they… have accepted so many novelties. We are in them; we from down there (he points downward) have stirred them up. Prior to that, we deliberated a great deal as to how to destroy the Catholic Mass.

It is over a hundred years ago that Catherine Emmerich said: “It was in Rome…” She saw Rome, the Vatican in a vision. She saw it, surrounded entirely by a deep ditch, and beyond the ditch stood the unbelievers. In the center of Rome, in the Vatican, stood the Catholics. They threw their altars, their statues, their relics – almost everything – into this deep, deep ditch until it was almost filled-up. And that – that time is here now (he cries out in a frightening voice).