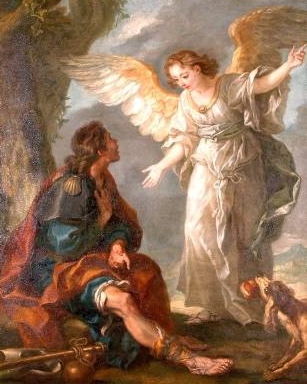 “So also you now indeed have sorrow, but I will see you again and your heart shall rejoice, and your joy no man shall take from you.” Words taken from St. John’s holy Gospel.

A number of years ago, I saw a large statue of a saint in a church, but I wasn’t sure about the saint’s identity. The statue showed the saint in a pilgrim outfit complete with a walking staff and a seashell. The statue also showed an exposed leg with a large sore on it along with a faithful dog licking the wound. At first, I thought it might be Lazarus, the poor man, so overlooked and mistreated by Dives, the rich man, mentioned in that parable spoken of by our Lord in the gospel. But I soon found out that it was the great Saint Rocco, the patron saint for avoiding the plague.

St. Rocco was born of noble parents in the 14th century AD in Montpelier in France. At birth, it was noted that Rocco had a red cross-shaped birthmark on the left side of his chest. It was actually a heavenly sign that the Blessed Virgin Mary had heard and answered his mother’s prayers for her barrenness to be healed. And as Rocco grew, the cross-shaped birthmark literally grew with him. As a child, St. Rocco was deeply religious; fasting twice a week after the example of his pious mother. But his parents died when he was only 20 years of age. On his deathbed, Rocco’s father made Rocco the governor of Montpelier, a position that Rocco did not want at all. And as a result, Rocco turned over the governorship to his uncle. He then gave away all his wealth and left Montpelier to journey as a beggar and a pilgrim to Italy. Rocco also became a third order Franciscan and took a vow of poverty. Dressed in the clothes of a pilgrim, St. Rocco departed for Rome, and along the way, he stopped at one particular town which was severely stricken by the bubonic plague. It was there that he devoted himself to plague victims. Instead of contracting the highly contagious disease himself, St. Rocco cured many people simply by making the Sign of the Cross over them. He soon visited other neighboring cities, and then finally, the eternal city of Rome.

Legend has it that everywhere he visited, the terrible scourge of plague disappeared before his miraculous power. Upon entering any town, he immediately went to the public hospitals in the cities, the greatest amount of sick people would be centered in these hospitals. And that’s where he wanted to be; in the midst of the sick and the infirm. All whom he encountered and prayed over were amazed at the miracles which took place through his prayers. At times he would just touch a sick person and healing took place. Wherever he went, sick people always sought him out. Rocco had been sent by the good Lord at the very height of a severe plague when people were literally dying in the streets. A miracle worker like St. Rocco was truly a Godsend. There is a tradition that while in Rome, St. Rocco healed a cardinal from the plague by making the sign of the cross on his forehead using his thumb. The mark made by Rocco remained on the head of that Cardinal until the day that Cardinal died.

But eventually, Rocco succumbed to the plague. When his travels brought him into one particular town, he discovered that he was no longer spared from the deadly disease, having finally contracted as evidenced by a very large sore on his leg. Instead of burdening anyone with his sickness, Rocco committed himself to the good Lord and waited for his death in a remote and abandoned forest hut. A spring arose nearby to provide St. Rocco with fresh water, and there he slept on leaves and drank water from the small stream. Providentially, and yes, miraculously, a local noblemen’s hunting dog found and befriended St. Rocco. The dog brought Rocco a daily supply of bread and also licked the wound in his leg. The healer, St. Rocco, was healed by the good Lord through a simple dog. The dog belonged to a nobleman called Gothard. And Gothard being curious one day decided to follow his dog as he went to St Rocco to feed and minister to him. And upon seeing St. Rocco, Gothard had pity on Rocco and brought him into his castle where Rocco was cured over time.

St. Rocco ended up travelling through Northern Italy for two or three more years before returning to his birthplace in France. He eventually returned to find that his home city was in the midst of a war. So weak and sick was Rocko from suffering, that the townspeople did not even recognize him, and he was actually thrown into jail and was accused of being an enemy spy.

It was his very uncle, the governor of Montpelier, who ordered him to be jailed, for he failed to recognize his nephew in his altered appearance. The humble Rocco refused to disclose his identity to the soldiers so that he could remain poor and unknown after having renounced his former life as the son of a governor. He was kept in prison for five years. St. Rocco was forgotten and abandoned and locked away. But God sent angels to minister to him while he was held in captivity.

On August 16 in the year 1378 AD, a guard entered Rocco’s cell and found the prisoner near death. Knowing that his end was drawing near, St. Rocco ash that a priest might come and administer the last sacraments. The priest on entering the prison was caught by surprise. He found the poor captive surrounded by a special bluish radiance. Informed of all that took place, Saint Rocco’s uncle came to the prison along with the governor’s mother, that is Rocco’s grandmother. The governor demanded to know St. Rocco’s identity. “Who is this man?” St. Rocco faintly replied, “I am your nephew, Rocco.” That moment St. Rocco died. Only one thing could prove for sure that the prisoner’s identity was that of Rocco. The governor asked that the body be disrobed. The governor then brought his mother near the body of Rocco, and having seen the very birthmark of a Red Cross, she identified it as that of her grandson. The governor and the townspeople present in the cell then believed. A voice was then heard coming forth out of paradise announcing that St. Rocco’s soul had merited immortal glory in heaven. Furthermore, a tablet appeared miraculously on the prison cell wall. And on that tablet, an angelic hand had written in golden letters the name of Rocco, and the prediction that all who would invoke his intercession would be delivered from pestilence and plague. They gave him a magnificent funeral and had a church built in his honor, in which his body was entombed. St. Rocco is venerated in the church today as the protector against the plague and all contagious diseases.
Today, his body is actually enclosed in a glass tomb in the Church of St. Rocco, in Venice, Italy. In bitter times, on St. Rocco’s feast on August 16, the Duke of Venice would process through the city with the Saint’s relics. And even in modern-day Europe, you can still find the initials, V.S.R., “Viva San Rocco.” over doorways and many villages as a prayer to ward off the plague. But though Rocco was a powerful healer on Earth, he became even more of a miraculous healer from his heavenly throne. During the Council of Constance in the year 1414 AD, the plague broke out again. The council fathers turned to St. Rocco, the patron saint against the plague, and arranged that the prayers and public processions be held in his honor, after which the plague immediately ceased. Because of his patronage against infectious diseases, St. Rocco was highly venerated and regarded in the late Middle Ages, especially in those Italian towns in which he had exercised his many healing powers. Many of those towns chose him as their very patron.

In this wondrous Easter season, we recall our Savior’s victory. He was betrayed, He was falsely accused, He was wrongly imprisoned, He who hid his infinite nobility, He who bore the plague of our sins in order to bring us the cure, He who was crucified and buried, now He is risen physically from the dead, never to die again. In fact, our Lord’s supreme greatness is manifested ever more with His miraculous rising from the grave. For He rises by His own power, showing the absolute dominion He exercises over life and death. He comes out of the sepulcher without disturbing the stone placed at its entrance as He came out of His holy mother’s womb without violating the seal of her perpetual physical virginity. As Pope St. Leo the Great stated, “Our Lord comes forth from the grave as the Old Testament Joseph came out of prison to command a whole nation to vindicate to his brothers a share in his happiness and glory. He comes forth like Moses out of the waters of the Nile to become the savior of his people. Our Lord rises like Daniel, out of the lion’s den, to be raised above the envious men who had plotted his death. He comes out of the sepulcher as victor over Hell and sin. And after breaking asunder the chains of death, He changes His weakness into power, His mortality into immortality, His many humiliations into glory and honor.”

St. Rocco endured his own passion but it brought about his exaltation. He did not fear the plague. He did not fear, abandonment, or imprisonment. He did not even fear death itself. Because in a real way, mystically, he was already dead. When you’re already dead, when the old Adam is dead in you and the new Adam is risen and alive, then earthly death is not feared. What then could be said of each one of us here today? That we do not fear a bodily death, that people could say to us as they said regarding our Lord, “He has risen. He is not here.” This man, one of us perhaps, is no longer a slave to his passions. He is risen out of the grave of his chronic and habitual life of sin. Like St. Rocco, Christ lives in him. He is not afraid of any plague or any contagion, but only fearful of the contagion of sin. This man is not afraid to die, because he is already dead.