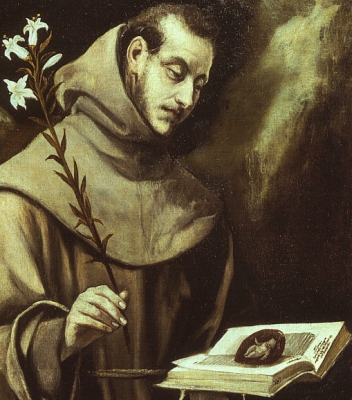 While the father of St. Anthony, Don Martin de Buglione, was living at Lisbon a murder was committed in the street close to his house and the corpse thrown into his garden, so that
suspicion might fall upon him. The nobleman was in fact accused of the murder, thrust into prison, and a long and painful trial began, with every prospect of ending in his being condemned to death. St. Anthony was just then at the monastery in Padua working for the interests of that Monastery for whose sake he had left everything dear to him. But God, in permitting this accusation, intended through it to make His beloved child known and glorified in his own land. Informed during prayer of his father s situation, he, in spite of his being provincial, went at once, according to his usual custom, to beg permission from the superiors to absent himself from the monastery for a few days. This granted, he started for Lisbon, convinced he would reach that city before sentence of death had been pronounced, mean while continuing his prayers for his unhappy parent. After journeying some distance he suddenly found him self transported to Lisbon, and his feelings can be easily imagined on receiving this fresh favor from heaven. He at once went to the place where the court was sitting, and began to plead his poor father s cause. The judges, although struck by the eloquence and cleverness of this strange Father, could not be convinced of the innocence of the accused. Anthony, repulsed by men, did not lose heart, and after a few moments spent in prayer, without asking leave or giving the judges time to recover from their astonishment, went to the cemetery, followed by the judges and an immense crowd of people, attracted hither by curiosity, and ordered the body of the murdered man to be exhumed. As soon as the coffin was visible he then, in a loud voice, in the name of God, commanded the deceased to bear witness before the judges present as to whether Don Martin de Buglione was his murderer or not. It The corpse at once obeyed, and sitting up, one hand raised and the other leaning against the ground, replied in a clear and sonorous voice: “Don Martin de Buglione is not my murderer.” The youth then entreated St. Anthony to give him the priestly absolution from excommunication which his sudden death had deprived him of. After receiving it he quietly laid him self down in his coffin, not to be disturbed again. As for St. Anthony, he suddenly disappeared from both judges and people, who cried aloud, as if awaking from a dream: “A miracle! a miracle! a great miracle!” It was thus that through the intervention of his son Don Martin de Buglione was declared innocent and restored to liberty. The reply, “I am come to save the innocent, and not to betray the guilty,” which St. Anthony made to the judges when asked who was then the real culprit, soon spread far end wide. He returned back to the monastery of Santa Ivlaria dell Arcella in the same miraculous manner after an absence of one day and two nights.