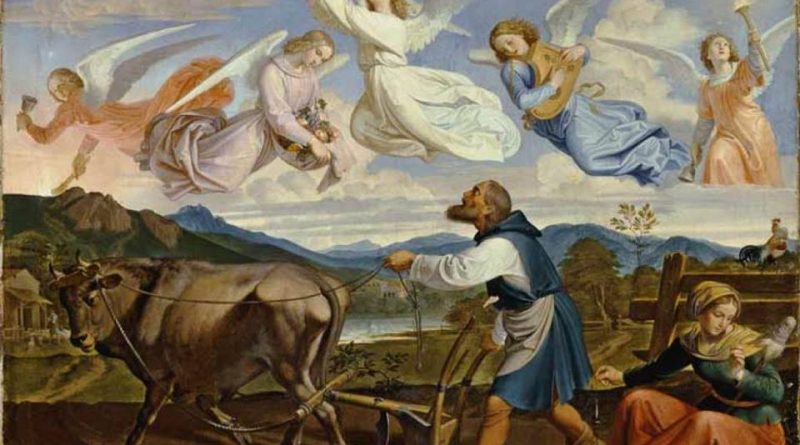 Saint Isidore was born in Madrid, Spain, where he worked the majority of his life in the fields. At a very young age—when Isidore was just old enough to carry a hoe—he entered the service of a wealthy Spanish landowner, John de Vergas, and proceeded to work humbly and diligently in the fields for the remainder of his life (60 years!). He married his wife, Maria Torribio, also humble and holy, and together they had one son, who died as a child. Following his death, both Isidore and Maria vowed to live lives of perfect continence. Isidore lifted all that he did to the Lord, praying each day behind the plow. He rose early each morning, attending Mass, and spent the majority of his days off from work praying in the churches of Madrid. His master was accepting (but suspicious) of his devotion, even when Isidore would arrive late to work as time escaped him in prayer! When his master questioned him, Isidore replied: “Sir, it may be true that I am later at my work than some of the other laborers, but I do my utmost to make up for the few minutes snatched for prayer; I pray you compare my work with theirs, and if you find I have defrauded you in the least, gladly will I make amends by paying you out of my private store.” His master, still suspicious, followed Isidore to church one morning, and then back to the fields. Holy legend recounts that upon this occasion (and others), angels came down from Heaven, dressed in white and working the plow behind teams of snow-white oxen in his absence. The angels were three times as productive as a man, so how could an employer complain! Running to Isidore, Senor Vergas questioned him as to who they were. Isidore replied, “Sir, I work alone and know of none save God to whom I look for strength.” He continued, “I know, sir, that I am your servant but I have another Master as well, to Whom I owe service and obedience.”Recognizing his sanctity, generosity, and humility, and having witnessed these miraculous events, Senor Vergas treated Isidore with the utmost respect throughout his life, looking to him for spiritual guidance and advice.