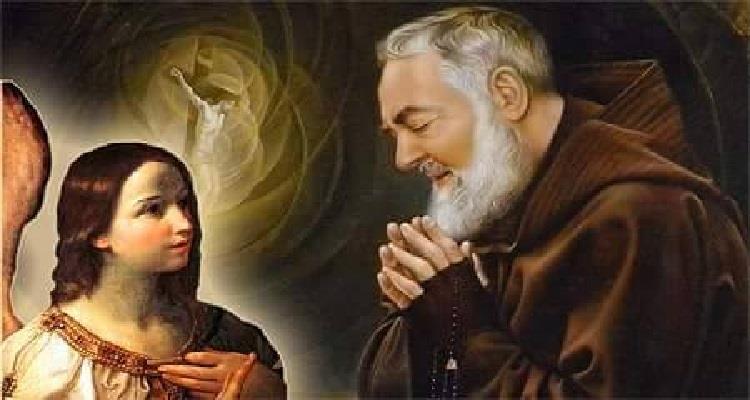 Padre Pio had the privilege of having his Guardian Angel visibly beside him all his life. He played with him when he was a child, and the Guardian Angel sang for him when he was sad.
.
Padre Pio lived in close contact with his Guardian Angel, who taught him to translate letters in French and Greek. The Angel would keep Padre Pio up at night so that they could both chant God’s praises. Padre Pio’s Angel would also ease the pain that he suffered from beatings that he received from demons.
.
Padre Pio wrote the following to his spiritual director on November 5, 1912: “I cannot tell you the way these scoundrels [the demons] beat me. Sometimes I feel I am about to die. On Saturday, it seemed to me that they intended to put an end to me and I did not know what saint to invoke. I turned to my angel and after he had kept me waiting a while, there he was hovering close to me, singing hymns to the divine Majesty in his angelic voice. . . I rebuked him bitterly for having kept me waiting so long when I had not failed to call him to my assistance. To punish him, I did not want to look him in the face; I wanted to get away, to escape from him. But he, poor creature, caught up with me almost in tears and held me until I raised my eyes to his face and found him all upset. Then he said: “I am always close to you, my beloved young man . . .”