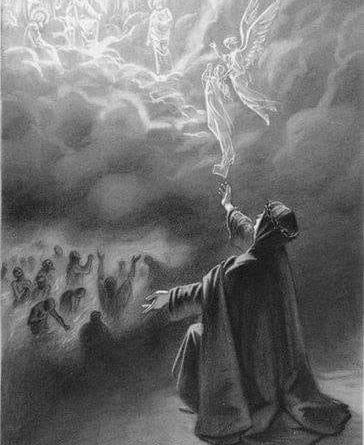 Saint Veronica received an extra Guardian Angel from Jesus after being continuously attacked by the devil. Her angels accompanied her on her visits to hell. God revealed to Veronica that upon the election of a new Pope, Heaven appoints to him an additional ten guardian angels to assist him. At one point in Saint Veronica’s Life, she took great care of her fellow Sister, Sister Angelica Berioli during her last illness. According to the accounts of the convent, Sister Angelica was not very observant of the rules and had always been Veronica’s adversary. However, Veronica offered many prayers and penances for the salvation her soul and prayed at her bedside day and night saying, “My Lord, Your Most Precious Blood and Your infinite merits can obtain this grace.”
.
One day, when Sister Angelica was still semiconscious, Veronica told her: “Before I go, I want you to tell me something, and I want you to call on Jesus and not on the devil as you do.” Sister Angelica listened to her and promised she would do it and asked Veronica not to abandon her. After this incident, Sister Angelica lost the use of reason for the most part and only once in a while would be heard saying the name of Jesus. The devil was not happy that Veronica was taking this soul from him and tried to prevent her many times from praying. Saint Veronica wrote “On two occasions the devil gave me many blows and told me I would pay for this. One night while I was watching over this sister, he appeared under the form of a cat, and he wanted to jump unto her bed. I tried to shoo him away, and he came close to me as when he tried to jump on me, more and more I would visibly see the demons here around her bed and they would threaten to make me pay for this.”
.
On the evening that Sister Angelica died, June 21, 1701, Veronica saw how four demons were tempting the dying sister, telling her there was no hope for her. Veronica was made to understand; however, that the demons had lost. When she realized that Sister Angelica was about to die, Veronica asked permission to her Confessor to visit the Blessed Sacrament. On her way to the Chapel, the devil appeared to her under the form of a cat and jumped on her. She had to fight the cat off up to the door of the chapel, whereupon he disappeared, saying, “You won, but you will pay for it.” After Veronica prayed before the Blessed Sacrament, she understood that she needed to go back to Sister Angelica who would soon expire, and it did happen that way. Then, the Lord let her know that Sister Angelica had been saved but that she would be in Purgatory for a long time and showed Veronica the place of expiation. Veronica commented, “A very dark and scary place.” Then, Veronica had a vision of this soul who had turned into “a terrifying animal.”
Sister Angelica appeared to Veronica the following night and told her: “This is not diabolical. It is true that I suffer. If you understood my suffering, you would die of pain.”
.
On another occasion, Veronica saw the place where she was in purgatory: “I saw a place so terrible and full of torment that I thought it was hell. I can’t explain it in writing but it struck me with fear and terror. It seemed to me that I saw all sorts of tortures that tormented many souls at the same time. One soul, among the others, suffered more than the others and I seem to understand that it was this soul (Sister Angelica).”
Veronica understood, however, that this soul could not benefit from the prayers said for her because during her life she had not prayed for the requests of others. The penances and prayers that Veronica was offering for this soul were being applied to other souls in purgatory. The second time that this soul appeared to Veronica, she told her, “I can’t and I shouldn’t” Veronica understood that ‘can’t’ referred to ‘what she was suffering’ and ‘shouldn’t referred to ‘why she was suffering’. But then the soul of Angelica said, “It is up to you to get me out of this great suffering. I will not forget (your help).”
Even though the Lord made Veronica understand that this soul should have remained in purgatory until the Final Judgement, He also was willing to accept for Love of Veronica, sacrifices for this soul. Veronica suffered greatly and even experienced her own personal judgment in atonement for this soul, which she was finally able to release from purgatory. Sister Angelica was only one of many souls that Veronica got out of purgatory by taking upon herself the expiation they required to enter into Heaven, often telling these souls, “Go on to Heaven, I will remain here in order to atone for your sins.” In expiation, she had even suffered her own final judgement, and to inflame her with a desire for the salvation of souls God had allowed her to see, hell and also purgatory. She often visited purgatory: “I spent tonight as usual in Purgatory, in the midst of fire and ice, sorrows and sufferings, in complete abandonment and without any one’s help. May the Will of God be praised.”
It seems that her confessors abused her charity by making her expiate for many souls. Among the souls she atoned for are the soul of her father, Francesco Giuliani, Pope Clement XI, some of her confessors and many sisters such as sister Angelica.