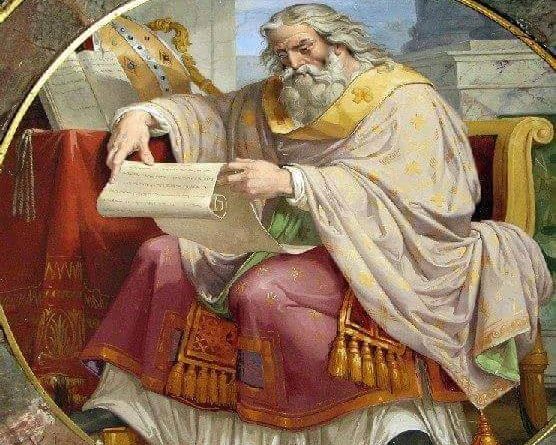 The Church was awash in the Arian heresy. The good and virtuous Bishop Dionysius had suffered exile, and a new heretical Arian bishop had replaced him. The Arian persecuted those who held to orthodoxy. In AD 374 the ecclesial tyrant died, and the people were free from twenty years of hardships.
The election of a bishop in the dawning years of the Church differed greatly than how it is gone today. Then it was popular for the people to elect a candidate or for the Emperor to nominate one. Assuming the man was upright and just, Rome would consent. However, in this situation the other bishops of the area begged Emperor Valentinian to simply appoint one by imperial edict, because they feared the choice and possible violence a choice of the people could precipitate. The Emperor rejected their plea, and it fell to Milian’s Governor, Ambrose, to make sure the election proceded with order.
“Proceeding to the basilica in which the disunited clergy and people were assembled, [Ambrose] began a conciliatory discourse in the interest of peace and moderation, but was interrupted by a voice (according to Paulinus, the voice of an infant [young child]) crying, “Ambrose, Bishop”. The cry was instantly repeated by the entire assembly, and Ambrose, to his surprise and dismay, was unanimously pronounced elected
Ambrose was not even a Catholic. He was however an unbaptized catechumen interested in the Catholic faith, and was known to already be a staunch defender of the Nicene Creed. His political prudence and his nascent orthodox faith made him the perfect candidate for Bishop of Milan. Still, Ambrose did not want the post.
“At any rate his efforts were unsuccessful. Valentinian, who was proud that his favourable opinion of Ambrose had been so fully ratified by the voice of clergy and people, confirmed the election and pronounced severe penalties against all who should abet him in his attempt to conceal himself. The Saint finally acquiesced, received baptism at the hands of a Catholic bishop, and eight day later, 7 December 374, the day on which East and West annually honour his memory, after the necessary preliminary degrees was consecrated bishop.
It is said that upon his consecration as a bishop, Ambrose used his rhetoric and political prudence to stamp our Arianism in his diocese.