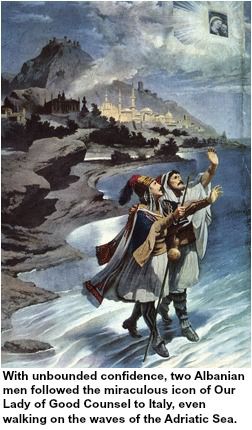 PRAYER TO OUR LADY OF GOOD COUNSEL IN TIMES OF DIFFICULT DECISIONS
(Pope Pius XII)
.
Holy Virgin, moved by the painful uncertainty we experience in seeking and acquiring the true and the good, we cast ourselves at thy feet and invoke thee under the sweet title of Mother of Good Counsel. We beseech thee: come to our aid at this moment in our worldly sojourn when the double darkness of error and of evil plot our ruin by leading minds and hearts astray.
.
Seat of Wisdom and Star of the Sea, enlighten the victims of doubt and of error so that they may not be seduced by evil masquerading as good; strengthen them against the hostile and corrupting forces of passion and of sin.
.
Mother of Good Counsel, obtain for us our most urgent need….. (here mention your request) and secure for us from thy Divine Son the love of virtue and the strength to choose, in doubtful and difficult situations, the course agreeable to our salvation.
.
Supported by thy hand we shall thus journey without harm along the paths taught us by the word and example of Jesus our Savior, following the Sun of Truth and Justice in freedom and safety across the battlefield of life under the guidance of thy maternal Star, until we come at length to the harbor of salvation to enjoy with thee unalloyed and everlasting peace. Amen.
(3 Our Father’s, 3 Hail Mary’s, 3 Glory Be’s)
.
.
The story of how the miraculous fresco of Our Lady of Good Counsel left Albania and traveled to Italy is one that is marvelous and true.

There is a little town, about 25 miles outside of Rome, called Genazzano. In pagan times it was a celebrated shrine for the worship of Venus, but in the fourth century a church was built there in honor of Our Lady and called the Church of the Virgin Mother of Good Counsel. Through the course of time the church was abandoned and almost fell into ruins. So it remained until the mid 15th century when a pious woman gave all she had for its restoration.
.
.
This story is about that pious woman, who in many ways is a symbol for our times. Most of the time her name is lost in the marvel of the facts of the story. She is simply recorded as a pious widow, a tertiary of the Order of St. Augustine, and perhaps she would have it that way. But it seems to me that the story and the miracle of the image of Our Lady of Good Counsel of Genazzano is in a special way her story, and her name should not be lost to history.
.
In 1436 Petruccia Noteria had been left a widow with respectable means. Living alone, for she had no children, she dedicated herself to prayer. Her special concern was the deplorable state of the Church of Our Lady of Good Counsel because she had been favored with a vision in which the Virgin Mary entrusted her with the mission of restoring this church.
.
Petruccia invoked the good will of the townspeople to assist in the work, but they proved unwilling. The strong walls of the small fortressed city had not been able to protect its inhabitants from the spirit of the Renaissance, with its love of luxury and comfort, from corrupting the customs and vanquishing the faith of its inhabitants.
.
Convinced of her mission and confident that Our Lady would provide the means for her to accomplish what had been asked of her, Petruccia donated all her goods to pay for the restoration of the sacred building with the hope that others would join her in the pious undertaking as they saw it being realized.
.
The work began and the rough beam walls of a side chapel were raised. But no noble souls joined in the enterprise. Instead Petruccia met with scorn and ridicule. Even some who formerly had called themselves her friends now reprimanded or laughed at her in public: “What imprudence! And at her age!” “Who does she think she is – another St. Francis?” “She must be mad! Who needs another church? The times have changed. The crazy visionary needs to wake up and see that the past is gone.”
.
The most courageous part of her story commences now. Many a person indeed has taken on noble enterprises and has been willing to make great sacrifices, offer their goods and even suffer death for the greater glory of God and the exaltation of the Holy Church. But then, before the laughter of their peers, for fear of meeting a condoning smile or a sarcastic word, the heroic resolution collapses.
.
The sign of the cross is abandoned at the important business lunch, the ladies tea, the university or high school lunchroom. The resolute 13-year-old girl who has determined to dress modestly turns 16, and the pressure of her peers is suddenly more than she can bear: she dons blue jeans and tank tops and puts aside her old promises. Young men leave off praying the Rosary, serving Mass, avoiding vulgar conversations and bad companions because they don’t want to seem like “nerds” or “losers”… At certain functions, the scapular is slipped into the pocket…
.
And why? For fear of a laugh. For fear of the laughter of a serving woman, St. Peter denied Our Lord. How many more denials have been made so that we can adapt to a public opinion that does not censure us — or fall into a life of being “normal” and “fitting in”?
.
Petruccia faced this laughter and scorn with a supernatural courage and confidence. She smiled at her detractors, continued her pious works and prayers, and replied to their taunts: “My dear children, do not put too much importance on this apparent misfortune. I assure you that before my death the Blessed Virgin and our holy father Augustine will finish the church begun by me.”

.
January of 1467 saw the death of the last great Albanian leader, George Castriota, better known as Scanderbeg. Raised by an Albanian chief, he placed himself at the head of his own people.
.
Subsequently, Scanderbeg inflicted stunning defeats on the Turkish army and occupied fortresses all over Albania.
.
With Scanderbeg’s death, the Turkish army, finally free from the Fulminating Lion of War, poured into Albania, occupying all its fortresses, cities and provinces with the exception of Scutari, in the north of the country.
.
However, the city’s capacity to resist was limited, and its capture was expected at any moment. With its fall, Christian Albania would be defeated. Faced with this prospect, those who wished to practice their faith in Christian lands began a sad exodus. Giorgio and De Sclavis also studied the possibility of fleeing, but something kept them in Scutari, where there was a small church, considered the shrine of the whole Albanian kingdom. In this church the faithful venerated a picture of Our Lady which had mysteriously descended from the heavens two hundred years before.
.
According to tradition, it had come from the east. Having poured out innumerable graces over the whole population, its church became the principal center of pilgrimage in Albania. Scanderbeg himself had visited this shrine more than once to ardently ask for victory in battle. Now the shrine was threatened with imminent destruction and profanation.
.
The two Albanians were torn by the idea of leaving the great treasure of Albania in the hands of the enemy in order to flee the Turkish terror. In their perplexity, they went to the old church to ask their Blessed Mother for the good counsel they needed.
.
That night, the Counsoler of the Afflicted inspired both of them in their sleep. She commanded them to prepare to leave their country, which they would never see again. She added that the miraculous fresco was also going to leave Scutari for another country to escape profanation at the hands of the Turks. Finally, she ordered them to follow the painting wherever it went.
.
The next morning, the two friends went to the shrine. At a certain moment they saw the picture detach itself from the wall on which it had hung for two centuries. Leaving its niche, it hovered for a moment and was then suddenly wrapped in a white cloud through which the image continued to be visible.
.
The pilgrim painting left the church and the environs of Scutari. It traveled slowly through the air at a considerable altitude and advanced in the direction of the Adriatic Sea at a speed that allowed the two walkers to follow; after covering some twenty-four miles, they reached the coast.
.
With unbounded confidence, Giorgio and De Sclavis walk on the waves of the Adriatic Sea.
.
Without stopping, the picture left the land and advanced over the waters while the faithful Giorgio and De Sclavis continued to follow, walking on the waves much like their Divine Master had done on Lake Genesareth.
.
When night would fall, the mysterious cloud, which had protected them with its shade from the heat of the sun during the day, guided them by night with light, like the column of fire in the desert that guided the Jews in their exodus from Egypt. They traveled day and night until they reached the Italian coast. There, they continued following the miraculous picture, climbing mountains, fording rivers and passing through valleys. Finally, they reached the vast plain of Lazio from where they could see the towers and domes of Rome. Upon reaching the gates of the city, the cloud suddenly disappeared before their disappointed eyes. Giorgio and De Sclavis began to search the city, going from church to church asking if the painting had descended there. All their attempts to find the painting failed, and the Romans incredulously regarded the two foreigners and their strange tale.Shortly thereafter, amazing news came to Rome: a picture of Our Lady had appeared in the skies of Genazzano to the sound of beautiful music and had come to rest over the wall of a church that was being rebuilt. The two Albanians rushed to find their country’s beloved treasure miraculously suspended in the air next to the wall of the chapel where it remains to this day.Although some inhabitants found the strangers’ story difficult to believe, careful investigation later proved that the two were telling the truth and that the image was indeed the same one that graced the shrine in Scutari.
.
.
Prayer to Our Lady of Good Counsel
.
Most Glorious Virgin, chosen by the Eternal Counsel to be the Mother of the Eternal Word made flesh, thou who art the treasurer of Divine graces, and the advocate of sinners, I, thy most unworthy servant, have recourse to thee; be thou pleased to be my guide and counselor in this vale of tears.
.
Obtain for me through the Most Precious Blood of thy Divine Son, the forgiveness of my sins, the salvation of my soul, and the means necessary to obtain it.
.
In like manner, obtain for Holy Mother the Church victory over her enemies, and the spread of the kingdom of Jesus Christ upon the whole earth. Amen.
(Taken From Tradcatknight and other Sources)