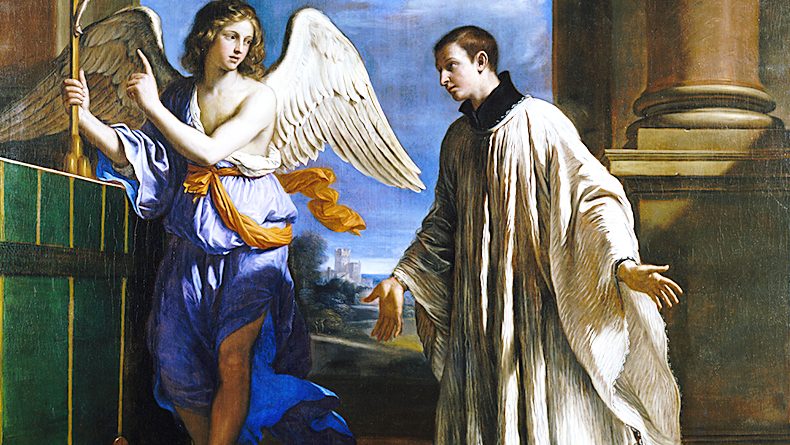 Patronage: Young students, Christian youth, Jesuit scholastics, the blind, AIDS patients, AIDS care-givers
.
Saint Aloysius, the eldest son of Ferdinand Gonzaga, Marquis of Castiglione, was born on the 9th of March, 1568. The first words he pronounced were the holy names of Jesus and Mary. When he was nine years of age he made a vow of perpetual virginity, and by a special grace was always exempted from temptations against purity. He received his first Communion at the hands of Saint Charles Borromeo. At an early age he resolved to leave the world, and in a vision was directed by our Blessed Lady to join the Society of Jesus. The Saint’s mother rejoiced on learning his determination to become a religious, but his father for three years refused his consent. At length Saint Aloysius obtained permission to enter the novitiate on November 25, 1585.
.
He pronounced his vows after two years, and studied, as was customary, philosophy and theology. A fervent penitent at all times, he was accustomed to say that he doubted whether without penance grace could continue to make headway against nature, which, when not afflicted and chastised, tends gradually to relapse into its unredeemed state, and thereby loses the habit of suffering. I am a crooked piece of iron, he said, and have come into religion to be made straight by the hammer of mortification and penance.
.
During his last year of theology a malignant fever broke out in Rome. The Saint offered himself for the service of the sick, and was accepted for the dangerous duty. Several of the religious contracted the fever, and Aloysius was among them. He was at the point of death but recovered, only to relapse a little later into a slow fever, which after three months his fragile health could no longer resist. He died at the age of twenty-three, repeating the Holy Name, a little after midnight between the 20th and 21st of June, on the octave day of Corpus Christi.
.
Reflection. Saint Robert Bellarmine, the Saint’s confessor, testified that Saint Aloysius had never mortally offended God. Pray that, supposing you have not maintained his innocence, you may yet imitate his penance.
.
Prayer to Venerate Any Saint
.
Saint Aloysius Gonzaga: Feast Day June 21
.
I desire therefore, first of all, that supplications, prayers, intercessions, and thanksgivings be made for all men: For kings, and for all that are in high station: that we may lead a quiet and a peaceable life in all piety and chastity. For this is good and acceptable in the sight of God our Saviour, Who will have all men to be saved, and to come to the knowledge of the truth.
(1 Timothy 2:1-4)
.
And another angel came, and stood before the altar, having a golden censer; and there was given to him much incense, that he should offer of the prayers of all saints upon the golden altar, which is before the throne of God. And the smoke of the incense of the prayers of the saints ascended up before God from the hand of the angel.
(Rev. 8:3-4)
.
ETERNAL Father, I wish to honor St. (Name), and I give Thee thanks for all the graces Thou has bestowed upon him (her). I ask Thee to please increase grace in my soul through the merits of this saint, and I commit the end of my life to him (her) by this special prayer, so that by virtue of Thy goodness and promise, St. (Name) might be my advocate and provide whatever is needed at that hour. Amen.
.
PROMISE: “When you wish to honor any particular saint and give Me thanks for all the graces I have bestowed on that saint, I increase grace in your soul through the merits of that saint. When you commit the end of your life to any of the saints by special prayers, I appoint those saints to be your advocates and to provide whatever you need at that hour.”-Our Lord to St. Gertrude
.
Blessed Anne Catherine Emmerich revealed in her Visions that saints are particularly powerful on their feast days and should be invoked then