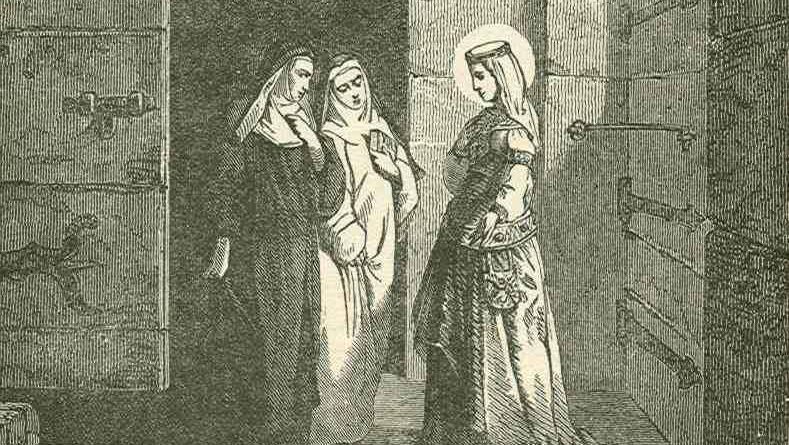 Saint Bertilla was born during the seventh century, of one of the most illustrious Christian families in the region of Soissons. As she grew up she learned to despise the world and earnestly desired to renounce it. Before telling her parents of her aspirations, she first consulted Saint Owen, by whom she was encouraged in her resolution. The Saint’s parents were then made acquainted by her counselor with her desire, which God inclined them not to oppose. They conducted her to Jouarre, a large monastery four leagues distant from Meaux, where she was received with great joy and formed in the strictest practices of monastic perfection.
She was named to receive visitors, then assigned to the care of the sick; in all her duties gentleness was joined with firmness, mercy with justice, humility with courage, and prudence with simplicity. She seemed to be the servant of each of her Sisters, and acquitted herself with such great charity and edification that she was chosen to be Prioress by the Abbess, to assist her in her administrative duties.
When the Queen of France, Saint Bathilda, wished to build the abbey of Chelles and retire there herself, she asked the Abbess of Jouarre to give her several religious and an Abbess to begin the new foundation. Saint Bertilla was placed in charge of the little group. The Archbishop of Lyons conducted the nuns to Chelles for the benediction of the monastery, which the Abbess then governed for forty-six years with both vigor and discretion. Saint Bathilda became one of her subjects, as did also a Queen of England, Heresvida, who came to seek at Chelles the peace which the world cannot give. Saint Bertilla’s humility only increased when she saw these and other royal ladies, attracted by her reputation of sanctity, obedient to her commandments.
The holy Abbess died in November, 692, after a life which God did not see fit to close by martyrdom, as she ardently desired. She was, however, her own executioner by the rigors to which she subjected her flesh, wishing all her life long to appease the justice of God, irritated by the offenses which never cease to cause suffering to His divine Son. Saint Bertilla was buried beside Saint Bathilda, in the abbatial church.
Prayer to Venerate Any Saint
Saint Bertilla: Feast Day November 5
Rev. 8:3-4 [3] And another angel came, and stood before the altar, having a golden censer; and there was given to him much incense, that he should offer of the prayers of all saints upon the golden altar, which is before the throne of God. [4] And the smoke of the incense of the prayers of the saints ascended up before God from the hand of the angel.
ETERNAL Father, I wish to honor St. (Name), and I give You thanks for all the graces You have bestowed upon him (her). I ask You to please increase grace in my soul through the merits of this saint, and I commit the end of my life to him (her) by this special prayer, so that by virtue of Your goodness and promise, St. (Name) might be my advocate and provide whatever is needed at that hour. Amen.
PROMISE: “When you wish to honor any particular saint and give Me thanks for all the graces I have bestowed on that saint, I increase grace in your soul through the merits of that saint. When you commit the end of your life to any of the saints by special prayers, I appoint those saints to be your advocates and to provide whatever you need at that hour.”-Our Lord to St. Gertrude
Blessed Anne Catherine Emmerich revealed in her Visions that saints are particularly powerful on their feast days and should be invoked then.