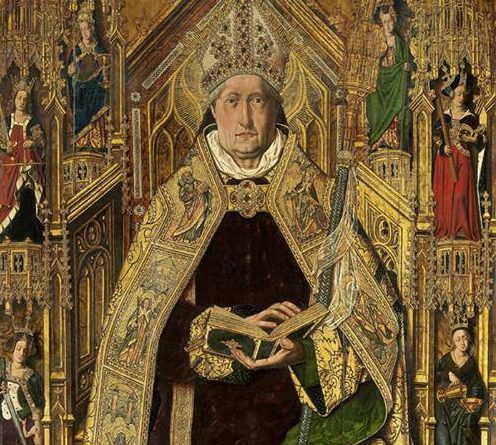 Patronage:against rabies; against rabid dogs; against insects; captives; pregnant women; prisoners; shepherds
.
Saint Dominic, a Saint of the eleventh century, was given the surname of Silos because of his long sojourn in the monastery of that name. He was of the line of the ancient kings of Navarre. He undertook on his own to study his religion, having virtually no teacher but the Holy Spirit. Ordained a priest, he entered a monastery of the Order of Saint Benedict, where his sanctity soon placed him in the first ranks as its Abbot.
.
The monastery of Silos had greatly declined from its former glory and fervor. The monk Licinian, who was deploring this situation, was offering Holy Mass on the day when Dominic entered the church. By a special permission of God, when the priest turned towards the people at the Offertory to chant: Dominus vobiscum, he said instead: Behold, the restorer cometh! and the choir responded: It is the Lord who has sent him! The oracle was soon to be visibly fulfilled. The charity of the Saint was not concentrated only in his monastery, but was extended to all who suffered afflictions. His gift of miracles drew to the convent the blind, the sick, and the lame; and it was by the hundreds that he cured them, as is still evident today from the ex-votos of the chapel where his relics are conserved. The balls-and-chains, iron handcuffs and the like, which are seen suspended from the vault there, attest also to his special charity for the poor Christians held captive by the Spanish Moors. He often went to console them and pay their ransom, thus preluding the works of the Order of Our Lady of Ransom, founded in 1218, 145 years after his death.
.
After many years of good works, Dominic felt the moment of the recompense approaching, and was advised of it by the Blessed Virgin. I spent the night near the Queen of Angels, he said one day to his religious. She has invited me to come in three days where She is; therefore I am soon going to the celestial banquet to which She invites me. In effect, he fell ill for three days, and then his brethren saw his soul rise in glory to heaven.
.
At his tomb Saint Joan of Aza, mother of Saint Dominic of Guzman, Founder of the Order which bears his name, later obtained the birth of her son, baptized under the name of his holy patron.
.
Saint Nemesion of Alexandria: Feast Day December 20
.
Rev. 8:3-4 [3] And another angel came, and stood before the altar, having a golden censer; and there was given to him much incense, that he should offer of the prayers of all saints upon the golden altar, which is before the throne of God. [4] And the smoke of the incense of the prayers of the saints ascended up before God from the hand of the angel.
.
ETERNAL Father, I wish to honor St. (Name), and I give You thanks for all the graces You have bestowed upon him (her). I ask You to please increase grace in my soul through the merits of this saint, and I commit the end of my life to him (her) by this special prayer, so that by virtue of Your goodness and promise, St. (Name) might be my advocate and provide whatever is needed at that hour. Amen.
.
PROMISE: “When you wish to honor any particular saint and give Me thanks for all the graces I have bestowed on that saint, I increase grace in your soul through the merits of that saint. When you commit the end of your life to any of the saints by special prayers, I appoint those saints to be your advocates and to provide whatever you need at that hour.”-Our Lord to St. Gertrude
.
Blessed Anne Catherine Emmerich revealed in her Visions that saints are particularly powerful on their feast days and should be invoked then