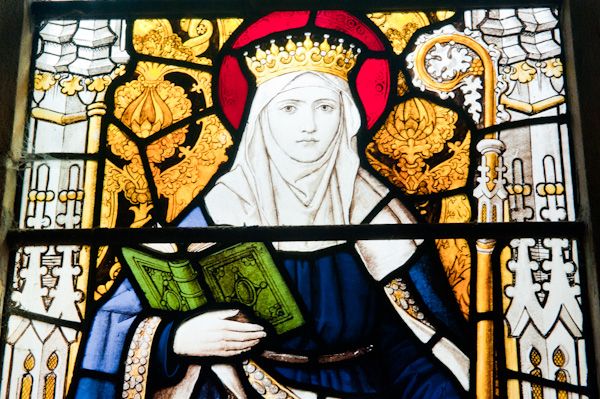 Queen and Abbess
.
Patronage: Throat complaints
.
Born the daughter of a king in about 630 in Northumbria, Saint Etheldreda, sometimes called Audrey, was brought up in the fear of God. Her mother and three sisters are also numbered among the Saints. Etheldreda had but one aim in life, to devote herself to His service in the religious state. Her parents, however, had other views for her, and, in spite of her tears and prayers, she was compelled to become the wife of a certain prince named Tonbert. She lived with him as a virgin for three years, and at his death retired to the isle of Ely which she had inherited, that she might apply herself wholly to heavenly things. This happiness was but short-lived; for the powerful King of Northumbria pressed his suit with such insistence that she was forced into a second marriage. Her life at his court was that of an ascetic rather than a queen; she lived with him not as a wife, but as a sister, and devoted her time to works of mercy and love, while observing a scrupulous regularity of discipline.
.
After twelve years, she retired with her husband’s consent to Coldingham Abbey, then under the rule of Saint Ebba, and received the veil from the hands of Saint Wilfrid, who had been for many years her spiritual guide and protector. As soon as Etheldreda had left the court of her spouse, he repented of having consented to her departure, and followed her, meaning to bring her back by force. She took refuge on a headland on the southern coast near Coldingham; and here a miracle took place, for the waters forced a passage and hemmed in the hill with morasses, barring the further advance of the king. The Saint remained in this island refuge for seven days, until her royal spouse, recognizing the divine will, agreed to leave her in peace.
.
In 672 she returned to Ely and founded there a double monastery. She governed the convent herself, and by her example was a living rule of perfection to her Sisters. Some time after her death in 679, her body was found incorrupt, and Saint Bede records many miracles wrought by her relics.
.
Reflection. We learn from the life of Saint Etheldreda that God, who by a miracle confirmed the Saint’s vocation, will not fail those who with an undivided heart choose to serve Him. Let us resolve, in whatever state we may be, to live entirely detached from the world, and to separate from it as much as possible.
.
Prayer to Venerate Any Saint
.
Saint Etheldreda: Feast Day June 24
.
I desire therefore, first of all, that supplications, prayers, intercessions, and thanksgivings be made for all men: For kings, and for all that are in high station: that we may lead a quiet and a peaceable life in all piety and chastity. For this is good and acceptable in the sight of God our Saviour, Who will have all men to be saved, and to come to the knowledge of the truth. (1 Timothy 2:1-4)
.
And another angel came, and stood before the altar, having a golden censer; and there was given to him much incense, that he should offer of the prayers of all saints upon the golden altar, which is before the throne of God. And the smoke of the incense of the prayers of the saints ascended up before God from the hand of the angel. (Rev. 8:3-4)
.
ETERNAL Father, I wish to honor St. (Name), and I give Thee thanks for all the graces Thou has bestowed upon him (her). I ask Thee to please increase grace in my soul through the merits of this saint, and I commit the end of my life to him (her) by this special prayer, so that by virtue of Thy goodness and promise, St. (Name) might be my advocate and provide whatever is needed at that hour. Amen.
.
PROMISE: “When you wish to honor any particular saint and give Me thanks for all the graces I have bestowed on that saint, I increase grace in your soul through the merits of that saint. When you commit the end of your life to any of the saints by special prayers, I appoint those saints to be your advocates and to provide whatever you need at that hour.”-Our Lord to St. Gertrude
.
Blessed Anne Catherine Emmerich revealed in her Visions that saints are particularly powerful on their feast days and should be invoked then