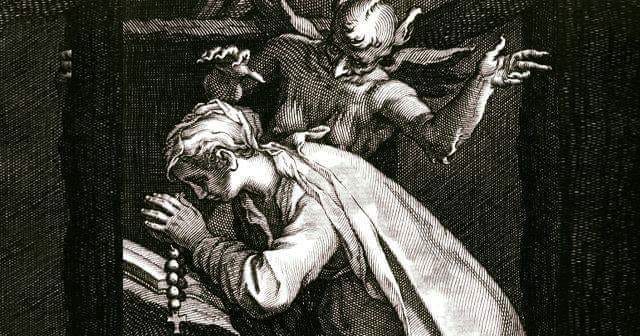 Saint Euphrasia, born in Constantinople, was the daughter of noble and pious parents, honored by the pious Emperor Theodosius and the Empress of that city. After the early death of Antigonus, her father, her mother consecrated her widowhood to God, and retired with their only child into Egypt, where she possessed a very large estate. In those days there were many monasteries of nuns as well as of holy cenobites; in one single city there were twenty thousand such holy women, consecrated to Jesus Christ. Euphrasia’s mother chose to reside near a monastery of one hundred and thirty nuns, which she often visited, accompanied by Euphrasia. When the little girl, seven years of age, begged that she might be permitted to serve God in this monastery, the pious mother wept for joy.
.
Then the mother led her before an image of our Redeemer, and lifting up her hands to heaven said, Lord Jesus Christ, receive this child under Your special protection. It is You alone whom she loves and seeks; to You she recommends herself. Then leaving her in the hands of the abbess, she went out of the monastery weeping. She continued her life of prayer and mortification, and a few years later, when this good mother fell sick, she slept in peace.
.
On receiving the news of her death, Theodosius sent for the noble virgin to come to court, as he considered himself her protector, and already during her childhood had arranged for her to be married to a young senator of Constantinople, when she would reach a suitable age. But the virgin wrote him, refusing the alliance, repeating her vow of virginity, and requesting that her estates be sold and divided among the poor, and all her slaves set at liberty. The emperor punctually executed all her wishes, shortly before his death in 395.
.
Saint Euphrasia was a perfect pattern of humility, meekness, and charity. If she found herself assaulted by any temptation, she immediately sought the advice of the abbess, who often on such occasions assigned to her some humbling and painful penitential labor, which she would execute to perfection. Once she moved a pile of great rocks from one place to another, continuing for thirty days with wonderful simplicity, until the devil, vanquished by her humble obedience, left her in peace. She became powerful over the demons, and delivered many possessed persons. She cured a child who was paralyzed, deaf and dumb, making the sign of the cross over him and saying, May He who created you, heal you! She was favored with other miracles also, both before and after her death, which occurred in the year 412, the thirtieth of her age.
.
Reflection. Let us always remember our obligation to renounce ourselves and resist the desires of the flesh, fearing its constant seeking of self-satisfaction. In that way we will become docile rather to the Holy Spirit, and what the Apostle says will be realized: The one who adheres to God becomes one spirit with Him. (I Cor. 6:17) (Jean-Jacques Olier)
.
Prayer to Venerate Any Saint
.
Saint Euphrasia: Feast Day March 13
.
I desire therefore, first of all, that supplications, prayers, intercessions, and thanksgivings be made for all men: For kings, and for all that are in high station: that we may lead a quiet and a peaceable life in all piety and chastity. For this is good and acceptable in the sight of God our Saviour, Who will have all men to be saved, and to come to the knowledge of the truth.
(1 Timothy 2:1-4)
.
And another angel came, and stood before the altar, having a golden censer; and there was given to him much incense, that he should offer of the prayers of all saints upon the golden altar, which is before the throne of God. And the smoke of the incense of the prayers of the saints ascended up before God from the hand of the angel.
(Rev. 8:3-4)
.
ETERNAL Father, I wish to honor St. (Name), and I give Thee thanks for all the graces Thou has bestowed upon him (her). I ask Thee to please increase grace in my soul through the merits of this saint, and I commit the end of my life to him (her) by this special prayer, so that by virtue of Thy goodness and promise, St. (Name) might be my advocate and provide whatever is needed at that hour. Amen.
.
PROMISE: “When you wish to honor any particular saint and give Me thanks for all the graces I have bestowed on that saint, I increase grace in your soul through the merits of that saint. When you commit the end of your life to any of the saints by special prayers, I appoint those saints to be your advocates and to provide whatever you need at that hour.”-Our Lord to St. Gertrude
.
Blessed Anne Catherine Emmerich revealed in her Visions that saints are particularly powerful on their feast days and should be invoked then