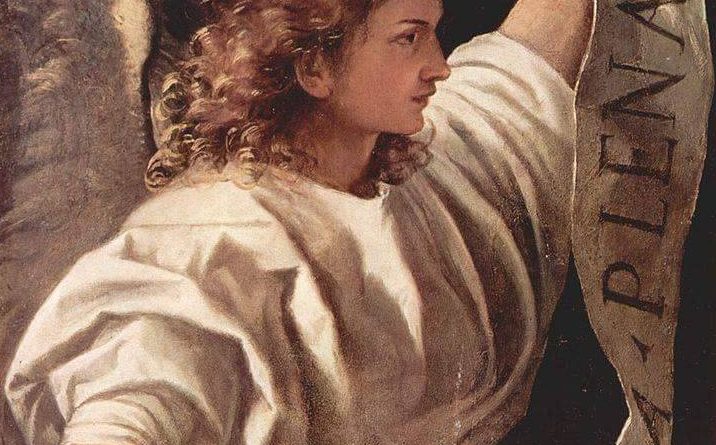 The day before the great feast of the Annunciation, the Church celebrates the feast of the Archangel who brought to earth the glad tidings that Mary was chosen to be the Mother of the Incarnate God.

This angelic Messenger appears several times in the history of God’s chosen people. He came to Daniel the prophet after he had a vision of the future Persian and Greek empires, to explain the vision to him, as Daniel narrates in the eighth chapter of his book. So great was the Archangel’s majesty that the prophet fell on his face trembling.

The Angel of the Incarnation again appeared to the prophet to answer his prayer at the end of the exile, and advise him of the exact date of the future Redemption by the long-awaited Messiah.

When the fullness of time had come, Gabriel was sent several times as the harbinger of the Incarnation of the Most High God. First, to the Temple of Jerusalem, while Zachary stood at the altar of incense, to tell him that his wife Elizabeth would bring forth a son to be called John, who would prepare the way of the Lord. (Luke 1:17) Six months later the great Archangel again appeared, bearing the greatest message God ever sent to earth. Standing before the Blessed Virgin Mary, this great Archangel of God trembled with reverence as he offered Her the ineffable honor of becoming Mother of the Eternal Word. Upon Her consent, the Word was made flesh and dwelt among us. It was he, we can readily believe, who also fortified Saint Joseph for his mission as virginal father of the Saviour.

Gabriel rightly bears the beautiful name, the strength of God, manifesting in every apparition the power and glory of the Eternal. According to some of the Fathers of the Church, it was Saint Gabriel, Angel of the Incarnation, who invited the shepherds of Bethlehem to come to the Crib to adore the newborn God. He was with Jesus in His Agony, no less ready to be the strength of God in the Garden than at Nazareth and Bethlehem. Throughout Christian tradition he is the Angel of the Incarnation, the Angel of consolation, the Angel of mercy.