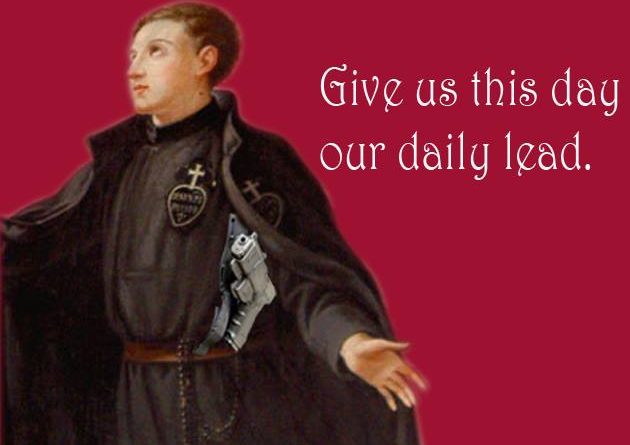 In 1860, soldiers from Garibaldi entered the mountain village of Isola, Italy. They began to burn and pillage the town, terrorizing its inhabitants. Possenti, with his seminary rector’s permission, walked into the center of town, unarmed, to face the terrorists. One of the soldiers was dragging off a young woman he intended to rape when he saw Possenti and made a snickering remark about such a young monk being all alone. Possenti quickly grabbed the soldier’s revolver from his belt and ordered the marauder to release the woman. The startled soldier complied, as Possenti grabbed the revolver of another soldier who came by. Hearing the commotion, the rest of the soldiers came running in Possenti’s direction, determined to overcome the rebellious monk. At that moment a small lizard ran across the road between Possenti and the soldiers. When the lizard briefly paused, Possenti took careful aim and struck the lizard with one shot. Turning his two handguns on the approaching soldiers, Possenti commanded them to drop their weapons. Having seen his handiwork with a pistol, the soldiers complied. Possenti ordered them to put out the fires they had set, and upon finishing, marched the whole lot out of town, ordering them never to return. The grateful townspeople escorted Possenti in triumphant procession back to the seminary, thereafter referring to him as “the Savior of Isola”.