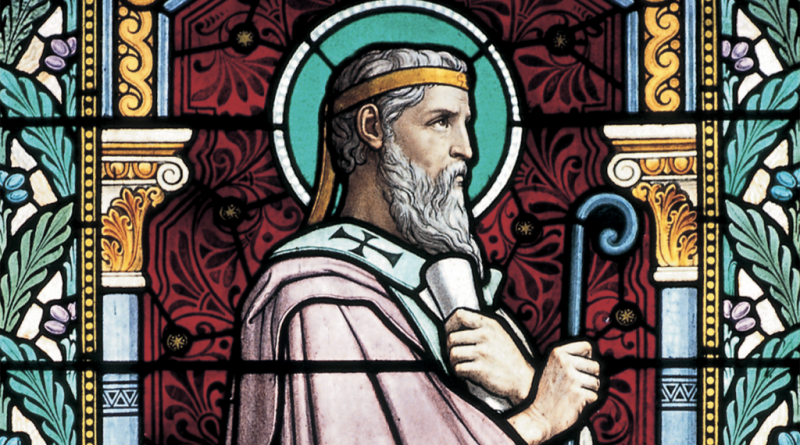 Saint Irenaeus was born in the year 120; he was of the Greek tongue, and probably a native of Asia Minor. His parents, who were Christians, placed him while still young under the care of the great Saint Polycarp, Bishop of Smyrna. It was in this holy school that he learned the sacred science which later made him a great ornament of the Church and the terror of her enemies. Saint Polycarp cultivated his rising genius and formed his mind to piety by his precepts and example, and the zealous young scholar was careful to reap all advantages offered him by the solicitude of such a master. Such was his veneration for his tutor’s sanctity that he observed all the acts and virtues he saw in that holy man, the better to copy his example and learn his spirit. He listened to his instructions with an insatiable ardor, and so deeply did he engrave them in his heart that the impressions remained vivid even in his old age. In order to confound the heresies of his age, this Doctor of the Church acquainted himself with the conceits of the pagan philosophers, and thereby became qualified to trace every error to its sources and set it in its full light. By his writings he was already known to Tertullian, Theodoret and Saint Epiphanus, who speak of him as a luminous torch of truth in the darkness of those times.
.
After Irenaeus had spent a number of years in combat against the eastern gnostics and philosophers of error, Saint Polycarp determined to send him to Gaul, where many of the heretics of Asia Minor had already migrated to pursue the Catholic religion, which was beginning to find roots there. With a company of about forty Christians, the valiant soldier of Christ ascended the Rhone to Lyons to rejoin and aid Saint Pothinus, its bishop. Saint Pothinus was already advanced in age, and his church’s neophytes could not always distinguish truth from the gnostic aberrations. Saint Pothinus received the apostles with joy and soon ordained Saint Irenaeus.
.
A hundred times he exposed himself to martyrdom by his zeal, acting as the right arm of the aging bishop, but God was reserving that crown for him twenty-five years later. When Saint Pothinus had glorified God by his splendid martyr’s death in the year 177, Ireneus was chosen to be the second bishop of Lyons. The persecutors imagined that Christianity had been stifled in Lyons, and they ceased their pursuits for a time.
.
This great Doctor of the Church wrote many important works, of which the most famous is his Adversus Haereses, Against the Heresies, in explanation of the Faith. By his preaching, Saint Irenaeus in a short time converted almost the whole country to the Faith; the Christians of Lyons became models by their candor, their estrangement from all ambition, their poverty, chastity and temperance, and in this way confounded many adversaries of their religion. Saint Irenaeus continued to imitate what he had seen done by his beloved master, Saint Polycarp, himself the disciple and imitator of Saint John the Apostle. One can readily imagine the excellence of the administration and the breadth of charity reigning in the Church of Lyons.
.
Finally he suffered martyrdom there, with many others, in the year 202, under the Emperor Septimus Severus, after eighty years spent in the service of the Lord. The imperial decrees renewing the persecutions arrived at Lyons at the time of the celebration of Severus’ tenth year of reign; the pagans found amid the celebrations an opportunity to take vengeance on the Christians, who refused to participate in the debaucheries which accompanied these feastings. Assassins armed with daggers, stones and knives filled the city with blood, and thousands of Christians won, with their bishop, the crown they had always admired as the greatest glory God could grant His servants.
.
Prayer to Venerate Any Saint
.
Saint Irenaeus: Feast Day June 28
.
I desire therefore, first of all, that supplications, prayers, intercessions, and thanksgivings be made for all men: For kings, and for all that are in high station: that we may lead a quiet and a peaceable life in all piety and chastity. For this is good and acceptable in the sight of God our Saviour, Who will have all men to be saved, and to come to the knowledge of the truth.
(1 Timothy 2:1-4)
.
And another angel came, and stood before the altar, having a golden censer; and there was given to him much incense, that he should offer of the prayers of all saints upon the golden altar, which is before the throne of God. And the smoke of the incense of the prayers of the saints ascended up before God from the hand of the angel.
(Rev. 8:3-4)
.
ETERNAL Father, I wish to honor St. (Name), and I give Thee thanks for all the graces Thou has bestowed upon him (her). I ask Thee to please increase grace in my soul through the merits of this saint, and I commit the end of my life to him (her) by this special prayer, so that by virtue of Thy goodness and promise, St. (Name) might be my advocate and provide whatever is needed at that hour. Amen.
.
PROMISE: “When you wish to honor any particular saint and give Me thanks for all the graces I have bestowed on that saint, I increase grace in your soul through the merits of that saint. When you commit the end of your life to any of the saints by special prayers, I appoint those saints to be your advocates and to provide whatever you need at that hour.”-Our Lord to St. Gertrude
.
Blessed Anne Catherine Emmerich revealed in her Visions that saints are particularly powerful on their feast days and should be invoked then