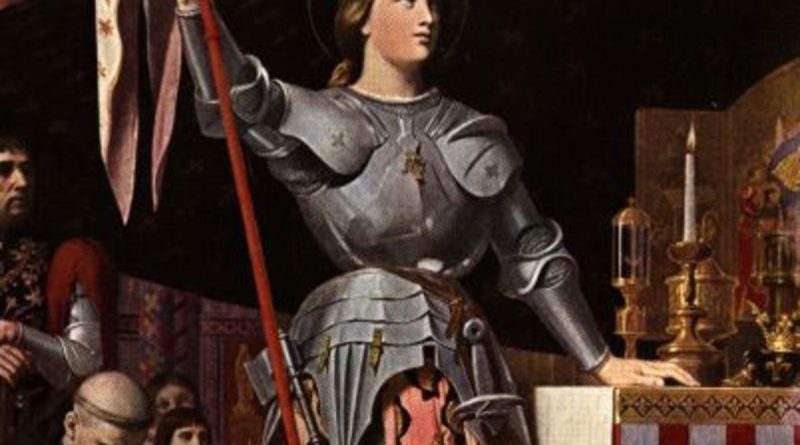 Patronage: France; martyrs; captives; military personnel; people ridiculed for their piety; prisoners; soldiers, women who have served in the WAVES (Women Accepted for Volunteer Emergency Service); and Women’s Army Corps
.
Who today does not know the history of the Maid of Orleans, who saved France from the foreign domination of the English, only to be betrayed by the legitimate prince whom her efforts had crowned at Rheims, then burnt at the stake on May 30, 1431? Both in the French and English languages, many books and articles have honored her since her canonization in 1920 by Pope Benedict XV.
.
The Holy Father spoke before the bishop of Orleans and others present for the reading of the decree which approved her two final great miracles, needed to proceed with the canonization. He said, We find the memory of Joan of Arc so apt to enkindle love in the French people for their mother country, that we regret being French only in our heart! Many others could say the same, and confirm the exactitude of the proverb: Every Christian has two mother countries — the one where he or she first saw the light of day, and France!
.
Two years later, Pope Pius XI declared Saint Joan patroness of France with the Most Blessed Virgin, placing her second only to the Mother of God. In that year Monsignor Baudrillart, French historian, wrote that Saint Joan of Arc may be proposed as an example to all young children by her perfect piety; as a model of fidelity to the call of heaven, to all young persons. For artisans, scholars, writers, teachers, she gives excellent example by her respect for truth and her remarkable prudence. Those dedicated to the works of mercy should find inspiration in her charity, visible when she consoled and wept for her wounded and dying enemies. All agricultural workers can invoke her with confidence, for when Joan, with the archbishop of Rheims, rode through the rich fields in the month of August and saw the reapers at work, she expressed a wish, despite the honors she then enjoyed, to die in the midst of the country-folk of France whom she loved. Her illness in prison, her martyrdom in the flames, recommend her intercession to the sick, as also to all who pray for loved ones in purgatory.
.
Finally, Monsignor Baudrillart concluded, we pray our new Patroness to intercede unceasingly with God and the Most Blessed Virgin that France, its thoughts turned towards the true liberty of God’s children and its own ancient dignity, may truly be today as before, the firstborn daughter of the Church. For centuries that title — conferred because of the early conversion of King Clovis and three thousand of his noble soldiers, baptized on Christmas day of 496 — was the glory of Christian France. It was later magnificently renewed and embellished by the heroic virgin, Joan of Arc.
.
Prayer to Venerate Any Saint
.
Saint Joan of Arc: Feast Day May 30
.
I desire therefore, first of all, that supplications, prayers, intercessions, and thanksgivings be made for all men: For kings, and for all that are in high station: that we may lead a quiet and a peaceable life in all piety and chastity. For this is good and acceptable in the sight of God our Saviour, Who will have all men to be saved, and to come to the knowledge of the truth. (1 Timothy 2:1-4)
.
And another angel came, and stood before the altar, having a golden censer; and there was given to him much incense, that he should offer of the prayers of all saints upon the golden altar, which is before the throne of God. And the smoke of the incense of the prayers of the saints ascended up before God from the hand of the angel. (Rev. 8:3-4)
.
ETERNAL Father, I wish to honor St. (Name), and I give Thee thanks for all the graces Thou have bestowed upon him (her). I ask Thee to please increase grace in my soul through the merits of this saint, and I commit the end of my life to him (her) by this special prayer, so that by virtue of Thine goodness and promise, St. (Name) might be my advocate and provide whatever is needed at that hour. Amen.
.
PROMISE: “When you wish to honor any particular saint and give Me thanks for all the graces I have bestowed on that saint, I increase grace in your soul through the merits of that saint. When you commit the end of your life to any of the saints by special prayers, I appoint those saints to be your advocates and to provide whatever you need at that hour.”-Our Lord to St. Gertrude
.
Blessed Anne Catherine Emmerich revealed in her Visions that saints are particularly powerful on their feast days and should be invoked then