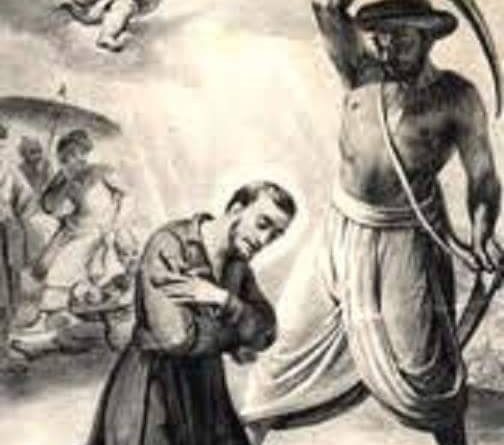 Patronage: Portugal, Roman Catholic Diocese of Sivagangai
.
Don Pedro II of Portugal, when a child, had among his little pages a modest boy of rich and princely parents. The young John de Britto — for that was his name — had much to bear from his careless-living companions, to whom his holy life was a reproach. A severe illness made him turn for aid to Saint Francis Xavier, a Saint well loved by the Portuguese; and when he recovered, in answer to his prayers, his mother clothed him for a year in the tunic worn in those days by the Jesuit Fathers. From that time John’s heart burned to follow the example of the Apostle of India.
.
When he was fifteen years old, he entered on December 17, 1662, the Lisbon novitiate of the Society of Jesus, and eleven years later, despite the determined opposition of his family and the court, he left with twenty-seven Jesuit co-disciples for Madura. Blessed John’s mother, when she had learned that her son was going to India, used all her influence to prevent him from leaving his own country, and persuaded the Papal Nuncio to intervene. But the future martyr declared firmly: God, who called me from the world into religious life, now calls me from Portugal to India. Not to respond to my vocation as I ought, would be to provoke the justice of God. As long as I live, I shall never cease to desire passage to India. His ardent desire was fulfilled.
.
He labored in the Jesuit province of Madura, which included seven missions, preaching, converting, and baptizing multitudes, at the cost of privations, hardships, and persecutions. In 1682, struck by his success and his sanctity, his Jesuit Superiors entrusted to him the government of the entire province. To the wars of the local kings, which created ravages, disorder, pillage and death for the people, famine, pestilence, and floods came to add to the devastation of the unhappy land. Both the days and the nights of Saint John were dedicated to bringing aid to the poor Christians and pagans afflicted by so many disasters. At times he took charge of entire populations which the wars had caused to migrate. All the Christians were pursued by bands of robbers, paid by the ruling elements to prevent any increase in the influence of the disciples of Christ. Saint John’s miracles helped him, and God preserved him from the snares of his many enemies.
.
After four years of this major responsibility, amid the anarchy which reigned, he was seized, tortured, and nearly massacred by the pagans, then banished from the local states. His Superiors sent him back to Europe to concern himself with the affairs of the missions of India. They wrote of him: He has affronted every peril to save souls and extend the kingdom of Jesus Christ, for whose love he has been captured several times and condemned to frightful torments. He preached in Portugal at the court and in the various dioceses and universities, without ever forgetting that he was a missionary of Madura, for which he recruited many generous workers for the Gospel vineyard.
.
He finally went back to the land of his choice in 1690 with twenty-five Jesuits, of whom several died during the voyage. The king of Portugal took every means to obtain his return to Portugal, if not as tutor to his son, which post he had declined, then as bishop of one of the Portuguese sees, but the Saint was occupied in baptizing thousands of catechumens and instructing the pagans whom grace had touched. The brahmans were alarmed once more and conjured his death; he was tracked everywhere, but the envoys could not take him for some time. Eventually they succeeded, and his great enemy, a local ruler, exiled him with orders to imprison him and kill him secretly. But his execution by decapitation was carried out in the sight of a multitude of Christians who knew of his coming martyrdom, and who saw him pray in an apparent ecstasy, which checked the executioner’s courage for a time. They buried him and did not cease to pray at the tomb of this second Apostle to India. He was canonized in 1947 by Pope Pius XII.
Prayer to Venerate Any Saint
.
Saint John de Britto: Feast Day February 16
.
Rev. 8:3-4 [3] And another angel came, and stood before the altar, having a golden censer; and there was given to him much incense, that he should offer of the prayers of all saints upon the golden altar, which is before the throne of God. [4] And the smoke of the incense of the prayers of the saints ascended up before God from the hand of the angel.
.
ETERNAL Father, I wish to honor St. (Name), and I give You thanks for all the graces You have bestowed upon him (her). I ask You to please increase grace in my soul through the merits of this saint, and I commit the end of my life to him (her) by this special prayer, so that by virtue of Your goodness and promise, St. (Name) might be my advocate and provide whatever is needed at that hour. Amen.
.
PROMISE: “When you wish to honor any particular saint and give Me thanks for all the graces I have bestowed on that saint, I increase grace in your soul through the merits of that saint. When you commit the end of your life to any of the saints by special prayers, I appoint those saints to be your advocates and to provide whatever you need at that hour.”-Our Lord to St. Gertrude
.
Blessed Anne Catherine Emmerich revealed in her Visions that saints are particularly powerful on their feast days and should be invoked then.