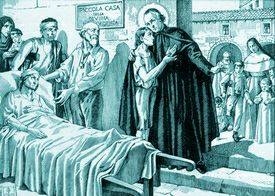 Saint Joseph Benedict Cottolengo was born in 1786 at Bra in Piedmont, Italy. As a secular priest in Turin, he showed a special concern for the sick poor, receiving them into a small house. This Little House of Divine Providence, the Piccola Casa, as he called it, was the beginning of an entire city of more than 7,000 poor persons, orphans, sick and lame, retarded, penitents, served by several religious Orders. These were distinguished by their names and their religious habits, each group being dedicated to a specific work they were assigned to do. And of this Piccola Casa, as it is still called, one can say what Saint Gregory Nazienzen said in his funeral eulogy of his friend Saint Basil’s large hospital: Go a little way outside the city and se, in this new city storehouses of piety, the common treasure of the owners, where a surplus of wealth has been laid up, where sickness is borne with patience, misfortune is considered happiness, and compassion is efficaciously practiced.
.
For this ever more pressing work, the Saint founded fourteen religious communities which today are still very widespread, especially in Italy. Among them were some which were purely contemplative; the life of prayer its members led was destined to draw down upon the others the blessing of heaven, thus completing by a spiritual work of mercy the corporal works exercised there. These religious prayed in particular for those who have the greatest need of assistance, the dying and the deceased. The Saint trusted totally in the infinite kindness of God, and as one of his friends said, he had more confidence in God than did the entire city of Turin. When he was asked about the source of his revenues, he answered, Providence sends me everything.
.
Confidence in God did not, however, cause him to cross his arms and observe. He slept only a few hours, often on a chair or bench, and then returned to his daily labor, work and prayer. But Saint Joseph Benedict was exhausting his strength. In 1842, the doctors decided that he should go to visit his brother in Chieri. When he entered the carriage, one of the Sisters cried out in tears: Father, you are sick; what will become of us? Be at peace, he answered. When I am in heaven, where one can do everything, I will help you more than now I do. I will hold to the cloak of the Mother of God and keep my eyes fixed on you. Do not forget what I, a poor old man, say to you today! A few days later, on April 30, 1842, death came. The final word of this great Saint was that of the Psalm: I rejoiced when it was said unto me,Let us go unto the House of the Lord! Saint Joseph Benedict was canonized by Pope Pius XI, March 19, 1934.
.
Prayer to Venerate Any Saint
.
Saint Joseph Benedict Cottolengo: Feast Day April 29
.
I desire therefore, first of all, that supplications, prayers, intercessions, and thanksgivings be made for all men: For kings, and for all that are in high station: that we may lead a quiet and a peaceable life in all piety and chastity. For this is good and acceptable in the sight of God our Saviour, Who will have all men to be saved, and to come to the knowledge of the truth. (1 Timothy 2:1-4)
.
And another angel came, and stood before the altar, having a golden censer; and there was given to him much incense, that he should offer of the prayers of all saints upon the golden altar, which is before the throne of God. And the smoke of the incense of the prayers of the saints ascended up before God from the hand of the angel. (Rev. 8:3-4)
.
ETERNAL Father, I wish to honor St. (Name), and I give You thanks for all the graces You have bestowed upon him (her). I ask You to please increase grace in my soul through the merits of this saint, and I commit the end of my life to him (her) by this special prayer, so that by virtue of Your goodness and promise, St. (Name) might be my advocate and provide whatever is needed at that hour. Amen.
.
PROMISE: “When you wish to honor any particular saint and give Me thanks for all the graces I have bestowed on that saint, I increase grace in your soul through the merits of that saint. When you commit the end of your life to any of the saints by special prayers, I appoint those saints to be your advocates and to provide whatever you need at that hour.”-Our Lord to St. Gertrude
.
Blessed Anne Catherine Emmerich revealed in her Visions that saints are particularly powerful on their feast days and should be invoked then.