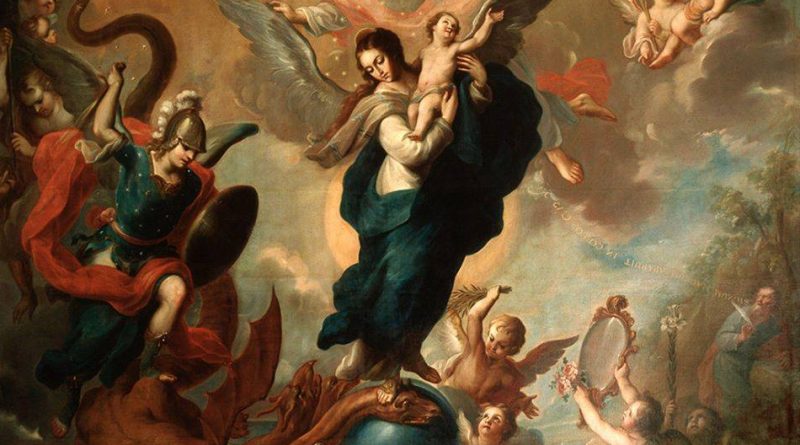 But the power of Mary over all the devils will especially shine forth in the latter times, when Satan will lay his snares against her heel; that is to say, her humble slaves, and her poor children, whom she will raise up to make war against him.
.
Mary’s function in the latter days: It was through Mary that the salvation of the world was begun, and it is through Mary that it must be consummated. Mary must shine forth more than ever in mercy, in might and in grace, in these latter times in mercy, to bring back and lovingly receive the poor, strayed sinner who shall be converted and shall return to the Catholic Church;In might, against the enemies of God, idolaters, schismatics, Muslims, and souls hardened in impiety, who shall rise in terrible revolt against God to seduce all those who shall oppose them and to make them fall by promises and threats; She must shine forth in grace, in order to animate and sustain the valiant soldiers and faithful servants of Jesus Christ, who shall battle of His interests. Mary must be terrible to the devil and his crew, as an army ranged in battle, principally in these latter times, because the devil, knowing that he has but little time, and now less than ever, to destroy souls, will every day redouble his efforts and his combats. He will presently raise up cruel persecutions and will put terrible snares before the faithful servants and true children of Mary, whom it give him more trouble to conquer than it does to conquer others.
.
The formation of the apostles of the latter times, God wishes that His holy Mother should be at present more known, more loved, more honored than She has ever been. This, no doubt, will take place if the predestined (enter, with the grace and light of the Holy Ghost, into the interior and perfect practice (Marian Consecration) which I will disclose to them shortly.The servants, slaves and children of Mary shall be, “the ministers of the Lord, who, like a burning fire, shall kindle the fire of divine love everywhere.”They shall be “like sharp arrows in the hand of the powerful” Mary to pierce her enemies (Ps 126:4).They shall be the sons of Levi, well purified by the fire of great tribulation, and closely adhering to God (1 Cor. 6:17), who shall carry:The gold of love in their heartThe incense of prayer in their spirit, andThe myrrh of mortification in their bodyThey shall be everywhere the good odor of Jesus Christ to the poor and to the little.While at the same time, they shall be an odor of death to the great, to the rich and to the proud worldlings.They shall be clouds thundering, and flying through the air at the least breath of the Holy Ghost; who, detaching themselves from everything and troubling themselves with nothing, shall shower forth the rain of the Word of God and of life eternal.They shall thunder against sin; they shall storm against the world; they shall strike the devil and his crew; and they shall pierce through and through, for life or for death, with their two-edged sword of the Word of God (Eph 6:17).They shall sleep without gold or sliver, and what is more, without care, in the midst of the other priests, ecclesiastics, and clerics (Ps. 67:14); and yet they shall have the silvered wings of the dove to go, with the pure intention of the glory of God and the salvation of souls, where so ever the Holy Ghost shall call them.Nor shall they leave behind them, in the places where they have preached anything but the gold of charity, which is the fulfillment of the whole law. (Rom 13:10).We know that they shall be true disciples of Jesus Christ, walking in the footsteps of His poverty, humility, contempt of the world, charity; teaching he narrow way of God in pure truth, according to the holy Gospel and not according to the maxims of the world…They shall have in their mouths the two-edged sword of the Word of God. They shall carry on their shoulders the bloody standard of the Cross, the Crucifix on their right hand and Rosary in their left, the sacred Name of Jesus and Mary in their hearts, and the modesty and mortification of Jesus Christ in their own behavior.