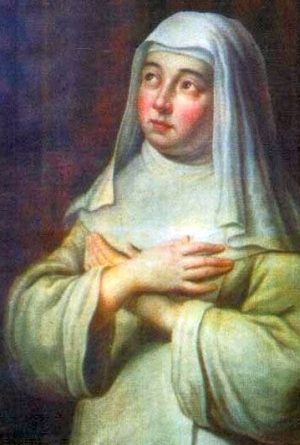 Patronage: against fever, women in labour
.
Mary of Oignies was born in the diocese of Liege in Belgium in 1167, of very wealthy parents. But while still very young, she rejected everything childish or vain games, beautiful clothing, ornaments. At the age of fourteen, despite her desire to be a nun, she was obliged to marry a virtuous young lord. Her holy life caused admiration in her spouse and decided him to follow her examples; and together they resolved to practice continence for life, to distribute their wealth to the poor and consecrate themselves to works of piety. The demon tried every artifice to make them relent in their holy resolution, but failed. They drew down on themselves the most abundant blessings, as well as sarcasms and insults from the worldly.
.
Mary had the gift of tears, and could not look at a crucifix without breaking into a torrent of tears or being ravished in ecstasy. When a priest told her to cease these exhibitions, she asked God to make him understand that it is not possible for a creature to arrest tears which the Holy Spirit obliges to well up. And the priest, that same day while saying his Mass, began to shed so many tears that the altar cloths and his vestments were wet with them.
.
She had a great devotion to Saint John the Evangelist and conversed with him as well as with her Guardian Angel. By vision and revelation she often knew the temptations and secrets of the hearts of the persons who consulted her. She converted many, obtained graces by her prayers for the living and especially for the dead, for whom she offered prayers and sacrifices, and suffered various illnesses with invincible patience. Her many visitors made her life of contemplation difficult, and she decided to change her residence; her husband permitted her to go to Oignies, where she lived in retreat amidst her heavenly favors and conversations.
.
She saw the place destined for her in heaven, and gave up her holy soul surrounded by angelic songs of bliss. The faithful who have addressed her were so impressed with the value of her intercession that her relics became the object of great respect. Buried at Oignies, her remains in 1609 were placed in a silver reliquary in its parish church of Our Lady; in 1817 they were transferred to the Church of Saint Nicolas at Nivelle, near her birthplace.
.
Prayer to Venerate Any Saint
.
Saint Mary of Oignies: Feast Day June 23
.
I desire therefore, first of all, that supplications, prayers, intercessions, and thanksgivings be made for all men: For kings, and for all that are in high station: that we may lead a quiet and a peaceable life in all piety and chastity. For this is good and acceptable in the sight of God our Saviour, Who will have all men to be saved, and to come to the knowledge of the truth. (1 Timothy 2:1-4)
.
And another angel came, and stood before the altar, having a golden censer; and there was given to him much incense, that he should offer of the prayers of all saints upon the golden altar, which is before the throne of God. And the smoke of the incense of the prayers of the saints ascended up before God from the hand of the angel. (Rev. 8:3-4)
.
ETERNAL Father, I wish to honor St. (Name), and I give Thee thanks for all the graces Thou has bestowed upon him (her). I ask Thee to please increase grace in my soul through the merits of this saint, and I commit the end of my life to him (her) by this special prayer, so that by virtue of Thy goodness and promise, St. (Name) might be my advocate and provide whatever is needed at that hour. Amen.
.
PROMISE: “When you wish to honor any particular saint and give Me thanks for all the graces I have bestowed on that saint, I increase grace in your soul through the merits of that saint. When you commit the end of your life to any of the saints by special prayers, I appoint those saints to be your advocates and to provide whatever you need at that hour.”-Our Lord to St. Gertrude
.
Blessed Anne Catherine Emmerich revealed in her Visions that saints are particularly powerful on their feast days and should be invoked then.