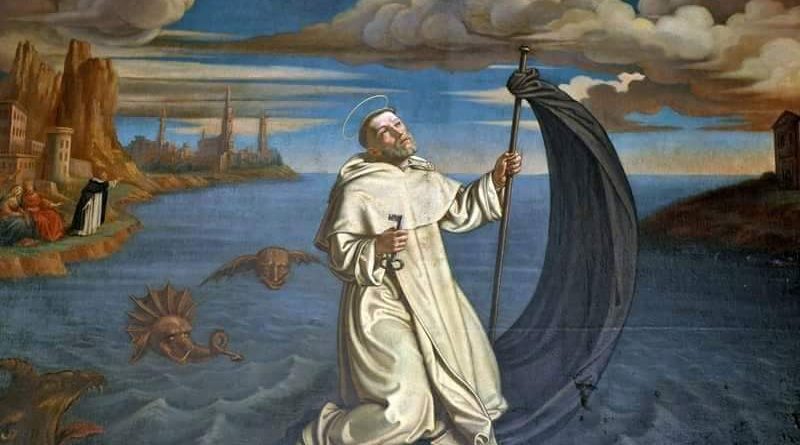 Patronage: attornies, barristers, canonists, lawyers, medical record librarians, Barcelona, Spain, Navarre, Spain
.
Born in 1175 of a noble Spanish family, Raymond, at the age of twenty, taught philosophy in Barcelona with marvelous success. Ten years later his rare abilities won for him the degree of Doctor in the University of Bologna, accompanied by many high dignities. A tender devotion to our Blessed Lady, which had increased within him from childhood, determined him in his mature years to renounce all his honors and to enter Her Order of Saint Dominic.
.
There a vision of the Mother of Mercy instructed him to cooperate with his penitent Saint Peter Nolasco, and with James, King of Aragon, in founding the Order of Our Lady of Ransom for the redemption of captives. He began this great work by preaching a crusade against the Moors, and by rousing to penance the Christians enslaved in both soul and body by the infidels. The king of Aragon, a man of great qualities but governed by a ruling passion, often took Saint Raymond with him on his voyages. On one such occasion, when they were visiting the island of Majorca, he was told by the Saint he must put away at once the cause of his sin. When he delayed, Raymond asked for leave to depart, since he could not live in company with sin. The king refused and under pain of death, forbade his conveyance by any ship. The Saint replied to the sailors, If a mortal king has given such a command, we will see that the Eternal King has disposed otherwise. Full of faith, he went out on a rock extending into the sea, and spread his cloak upon the waters. Tying one end of it to his staff as a sail, he made the sign of the cross and fearlessly stepped upon it. In six hours he was borne to Barcelona where, gathering up his cloak, which was dry, he made his way to his monastery.
.
The king, vanquished by this miracle, to which many were witness, became a sincere penitent and the disciple of the Saint until his death. In 1230, Gregory IX summoned Raymond to Rome, made him his confessor and grand penitentiary, and directed him to compile The Decretals, a collection of the scattered decisions of the Popes and Councils. Having refused the archbishopric of Tarragon, Raymond was in 1238 chosen to be the third General of his Order, which post he again succeeded in resigning, pleading his advanced age. His first act when set free was to resume his labors among the infidels, and in 1256 Raymond, then eighty-one, was able to report that ten thousand Saracens had received Baptism. He died at the age of one hundred years, in 1275.
.
Reflection. Ask Saint Raymond to protect you from the fearful servitude, worse than any bodily slavery, which even one sinful habit tends to form.
.
Prayer to Venerate Any Saint
.
Saint Vincent of Saragossa: Feast Day January 23
.
Rev. 8:3-4 And another angel came, and stood before the altar, having a golden censer; and there was given to him much incense, that he should offer of the prayers of all saints upon the golden altar, which is before the throne of God.And the smoke of the incense of the prayers of the saints ascended up before God from the hand of the angel.
.
ETERNAL Father, I wish to honor St. (Name), and I give You thanks for all the graces You have bestowed upon him (her). I ask You to please increase grace in my soul through the merits of this saint, and I commit the end of my life to him (her) by this special prayer, so that by virtue of Your goodness and promise, St. (Name) might be my advocate and provide whatever is needed at that hour. Amen.
.
PROMISE: “When you wish to honor any particular saint and give Me thanks for all the graces I have bestowed on that saint, I increase grace in your soul through the merits of that saint. When you commit the end of your life to any of the saints by special prayers, I appoint those saints to be your advocates and to provide whatever you need at that hour.”-Our Lord to St. Gertrude
.
Blessed Anne Catherine Emmerich revealed in her Visions that saints are particularly powerful on their feast days and should be invoked then.