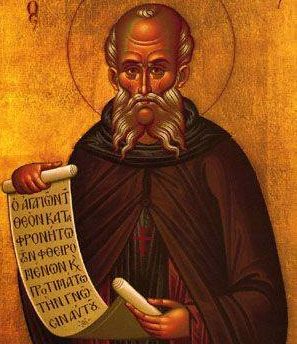 Saint Sabas, one of the most renowned patriarchs of the monks of Palestine, was born in the year 439, near Caesarea. At the age of fifteen, in the absence of his parents, he suffered under the conduct of an uncle, and weary of the world’s problems decided to forsake the world and enter a monastery not far from his family home. After he had spent ten years in religious life, his two uncles and his parents attempted to persuade him to leave the monastery to which he had migrated in Palestine. He replied: Do you want me to be a deserter, leaving God after placing myself in His service? If those who abandon the militia of earthly kings are severely punished, what chastisement would I not deserve if I abandoned that of the King of heaven?
.
When he was thirty years old, desiring greater solitude, he began to live an angelic life so far above nature that he seemed no longer to have a body. The young sage, as he was called by Saint Euthymius, Abbot of a nearby monastery, dwelt in a cavern on a mountain near Jerusalem, where he prayed, sang Psalms and wove baskets of palm branches. He was forty-five years old when he began to direct those who came to live as hermits, as he did, and he gave each of them a place to build a cell; soon this was the largest monastery of Palestine. He left the region when certain agitators complained of him, for he considered himself incapable of maintaining good discipline. The Patriarch of Jerusalem, Sallustus, did not easily credit the complaints, and instead ordained Sabas a priest, that he might say Mass for his disciples — for they had been displeased by his lack of desire for that honor. He was at that time fifty-three years old. The Patriarch presented him to them as their father, whom they should obey and honor, and made him Superior of all the Palestine monasteries. But several monks remained obstinate, and Saint Sabas again went elsewhere, to a cavern near Scythopolis.
.
As the years passed, he was in charge of seven monasteries; but his influence was not limited to Palestine. The heresies afflicting religion were being sustained by the emperor of Constantinople, who had exiled the Catholic Patriarch of that city, Elias. Saint Sabas converted the one who had replaced Elias, and wrote to the emperor that he should cease to persecute the Church of Jerusalem, and to impose taxes on the cities of Palestine which they were unable to pay. In effect, the people were reduced to extreme misery. The emperor died soon afterwards, and the pious Justin replaced him. Justin restored the true faith by an edict and recalled the exiles, re-establishing the exiled prelates in their sees.
.
When Saint Sabas was ninety-one years old, he made the long journey to Constantinople to ask Justinian, successor to Justin, not to act with severity against the province of Palestine, where a revolt had occurred by the non-submission of a group of Samaritans. The emperor honored him highly and wished to endow his monasteries with wealth, but the holy Patriarch asked him to use the riches he was offering to build a hospice for pilgrims in Jerusalem, to decorate the unfinished Church of the Blessed Virgin, to build a fortress where the monks could take refuge when barbarians invaded the land, and finally, to re-establish preaching of the true Faith, by edicts proscribing the various errors being propagated. The holy Abbot lived to be ninety-two years old, and died in 531, in the arms of the monks of his first monastery.
.
Prayer to Venerate Any Saint
.
Saint Sabas: Feast Day December 5
.
Rev. 8:3-4 And another angel came, and stood before the altar, having a golden censer; and there was given to him much incense, that he should offer of the prayers of all saints upon the golden altar, which is before the throne of God. And the smoke of the incense of the prayers of the saints ascended up before God from the hand of the angel.
.
ETERNAL Father, I wish to honor St. (Name), and I give You thanks for all the graces You have bestowed upon him (her). I ask You to please increase grace in my soul through the merits of this saint, and I commit the end of my life to him (her) by this special prayer, so that by virtue of Your goodness and promise, St. (Name) might be my advocate and provide whatever is needed at that hour. Amen.
.
PROMISE: “When you wish to honor any particular saint and give Me thanks for all the graces I have bestowed on that saint, I increase grace in your soul through the merits of that saint. When you commit the end of your life to any of the saints by special prayers, I appoint those saints to be your advocates and to provide whatever you need at that hour.”-Our Lord to St. Gertrude
.
Blessed Anne Catherine Emmerich revealed in her Visions that saints are particularly powerful on their feast days and should be invoked then.