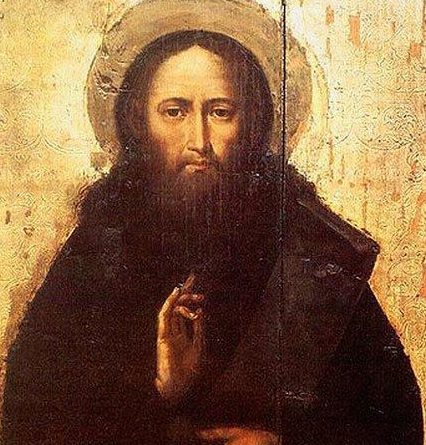 Saint Theodosius was born in Cappadocia in 423. He desired to visit the Holy Places, and on his way visited Saint Simeon Stylites to ask his counsel. Simeon perceived him amid the crowd and called him by his name: Theodosius, servant of God, you are welcome. His desire to follow Jesus Christ attracted him to the religious life. He placed himself under Longinus, a very holy hermit, who sent him to govern a monastery near Bethlehem. Unable to bring himself to command others, he fled to a cavern, where he lived in penance and prayer. His great charity, however, forbade him to refuse the charge of some disciples, who, few at first, became in time a vast number; and Theodosius built a large monastery and three churches for them.
.
The holy monk eventually was named by the Bishop of Jerusalem Superior of all the religious communities of Palestine. He and Saint Sabas, who had been appointed by Sallustus, the same bishop, to preside the Palestinian hermits, often consulted together on subjects of piety and edification and the means to procure the glory of God. Saint Theodosius accommodated himself so carefully to the characters of his subjects that his reproofs were loved rather than dreaded. But on one occasion he was obliged to put away from the communion of the others a religious guilty of a grave fault. Instead of humbly accepting his sentence, the monk was arrogant enough to allege to excommunicate Theodosius in revenge. Theodosius thought not of indignation, nor of his own position, but meekly submitted to this false and unjust excommunication. This so touched the heart of his disciple that he submitted at once and acknowledged his fault.
.
Theodosius never refused assistance to any in poverty or affliction; on some days the monks laid more than a hundred tables for those in need. In times of famine Theodosius forbade their alms to be diminished, and often miraculously multiplied the provisions. He built five hospitals, in which he lovingly served the sick, while by assiduous spiritual reading he maintained himself in perfect recollection. He successfully opposed the Eutychian heresy in Jerusalem and all of Palestine, and for this was banished by the emperor Anastasius. His exile lasted but a short time, for the emperor who sustained the heretics died soon afterwards, struck by lightning.
.
The holy abbot suffered a long and painful illness and refused to pray to be cured, calling it a salutary penance for his former successes. He died at the age of a hundred and six.
.
Reflection. Saint Theodosius, for the sake of charity, sacrificed all he most prized — his home for the love of God, and his solitude for the love of his neighbor. Can ours be true charity if it costs us little or nothing?
.
Prayer to Venerate Any Saint
.
Saint Theodosius: Feast Day January 11
.
Rev. 8:3-4 And another angel came, and stood before the altar, having a golden censer; and there was given to him much incense, that he should offer of the prayers of all saints upon the golden altar, which is before the throne of God. And the smoke of the incense of the prayers of the saints ascended up before God from the hand of the angel.
.
ETERNAL Father, I wish to honor St. (Name), and I give You thanks for all the graces You have bestowed upon him (her). I ask You to please increase grace in my soul through the merits of this saint, and I commit the end of my life to him (her) by this special prayer, so that by virtue of Your goodness and promise, St. (Name) might be my advocate and provide whatever is needed at that hour. Amen.
.
PROMISE: “When you wish to honor any particular saint and give Me thanks for all the graces I have bestowed on that saint, I increase grace in your soul through the merits of that saint. When you commit the end of your life to any of the saints by special prayers, I appoint those saints to be your advocates and to provide whatever you need at that hour.”-Our Lord to St. Gertrude
.
Blessed Anne Catherine Emmerich revealed in her Visions that saints are particularly powerful on their feast days and should be invoked then