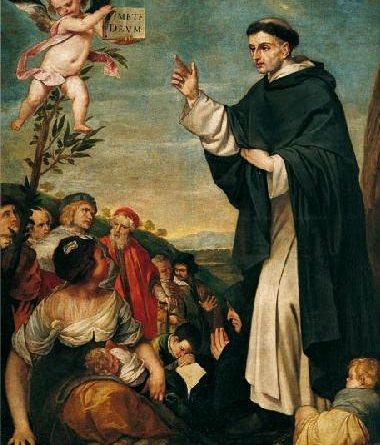 Saint Ferrer was one day passing to Pampeluna, and his sanctity being well known to all the inhabitants, they besought him to interest himself in behalf of the spiritual needs and conversion of a person of notoriously bad character, who would continue impenitent to the last day of her life. The charity of St. Vincent, which desired nothing so much as the salvation of souls, drew him promptly and with joy into the presence of this poor sinner. He unhappily found her completely hardened. She was obstinate and so despairing of her salvation that she exclaimed, blaspheming:
.
“It is impossible for me to be saved; God cannot pardon either the multitude or the enormity of my sins.”
..
The Saint began, then, with all the energy of his soul to offer her powerful reasons which might encourage her to hope for a generous pardon from God. But it was useless, that soul was hardened in evil. Seeing this, St. Vincent raised up his heart to God, made a short prayer, and led by a divine inspiration, he promised the sinner that her absolution should come in writing from heaven, if she would promise to make her confession. The wretched woman began to ridicule a pledge so extraordinary and which appeared to her impossible; yet she said to the Saint:
.
“If it be so, I am very willing to confess.”
.
Then, the Saint procured pen and paper, and wrote these words:
.
“Brother Vincent Ferrer beseeches the most Holy Trinity to grant the sinner here present the absolution of her sins.”
.
He then folded the paper, and cast it into the air; the document flew out of the house; but some minutes afterwards it returned folded and closed. Wonderful to relate, on opening it, St. Vincent found the following promise written in letters of gold:
.
“We, the most Holy Trinity, at the request of our Vincent, grant the sinner of whom he speaks, the pardon of her faults; We dispense her from all the punishment which she ought to undergo; and if she confesses, she shall be carried to heaven in half an hour, where she shall reign eternally with us… From heaven… We, the Father, Son, and Holy Ghost.”
.
St. Vincent read the answer, and without delay the happy woman made her confession; and after a half hour she immediately fell dead, her soul taken to Heaven. Oh! happy sinner!