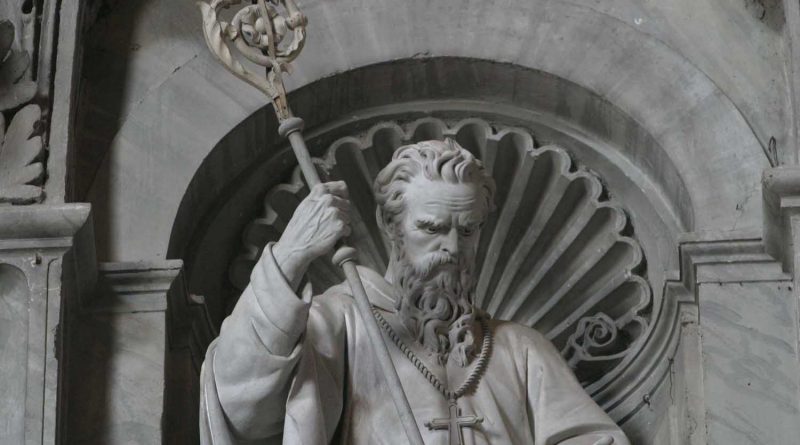 Abbot, Founder of the Congregation of Monte-Vergine

Saint William of Monte Vergine, born in Vercelli, a city of Lombardy, lost his father and mother in his infancy and was brought up by a relative in great sentiments of piety. At fifteen years of age, having an earnest desire to lead a penitential life, he left his native region and made a long and austere pilgrimage to the shrine of the Virgin founded by Saint James at Saragossa. He would have made the pilgrimage to Jerusalem, but God made known to him that he was calling him to a solitary life, and he retired into the kingdom of Naples. There he chose for his abode an uninhabited mountain, and lived in perpetual contemplation and the exercises of rigorous penitential austerities.
.
After a miracle of healing wrought by his prayers, he was discovered and his contemplation interrupted, so he decided to move to another mountain, where he built a very beautiful church in honor of Our Lady. With several former secular priests who joined him there, in 1119 he began the establishment of the Congregation of Monte Vergine, or Mount of the Virgin. This site is between Nola and Benevento in the same kingdom of Naples. These sons of Our Lady lived in great austerity. Seeing the progress in holiness of the good religious being formed there, the devil sowed division and criticism; but God drew good from the evil when Saint William went elsewhere and founded several more monasteries, both for men and women, in various places in the kingdom of Naples. He assisted the king of Naples, who greatly venerated him, to practice all the Christian virtues of a worthy sovereign, and the king in gratitude had a house of the Order built at Salerno opposite his palace, to have him near him more often.
.
When Saint William died on the 25th of June, 1142, he had not yet written a Rule for his religious; his second successor, Robert, fearing the dissolution of a community without constitutions, placed them under that of Saint Benedict, and is regarded as the first abbot of the Benedictine Congregation of Monte-Vergine. A portrait of the Virgin venerated there has been an unfailing source of holy compunction; pilgrims continue to visit it.
.
Prayer to Venerate Any Saint
.
Saint William of Vercelli: Feast Day June 25
.
I desire therefore, first of all, that supplications, prayers, intercessions, and thanksgivings be made for all men: For kings, and for all that are in high station: that we may lead a quiet and a peaceable life in all piety and chastity. For this is good and acceptable in the sight of God our Saviour, Who will have all men to be saved, and to come to the knowledge of the truth. (1 Timothy 2:1-4)
.
And another angel came, and stood before the altar, having a golden censer; and there was given to him much incense, that he should offer of the prayers of all saints upon the golden altar, which is before the throne of God. And the smoke of the incense of the prayers of the saints ascended up before God from the hand of the angel. (Rev. 8:3-4)
.
ETERNAL Father, I wish to honor St. (Name), and I give Thee thanks for all the graces Thou has bestowed upon him (her). I ask Thee to please increase grace in my soul through the merits of this saint, and I commit the end of my life to him (her) by this special prayer, so that by virtue of Thy goodness and promise, St. (Name) might be my advocate and provide whatever is needed at that hour. Amen.
.
PROMISE: “When you wish to honor any particular saint and give Me thanks for all the graces I have bestowed on that saint, I increase grace in your soul through the merits of that saint. When you commit the end of your life to any of the saints by special prayers, I appoint those saints to be your advocates and to provide whatever you need at that hour.”-Our Lord to St. Gertrude
.
Blessed Anne Catherine Emmerich revealed in her Visions that saints are particularly powerful on their feast days and should be invoked then