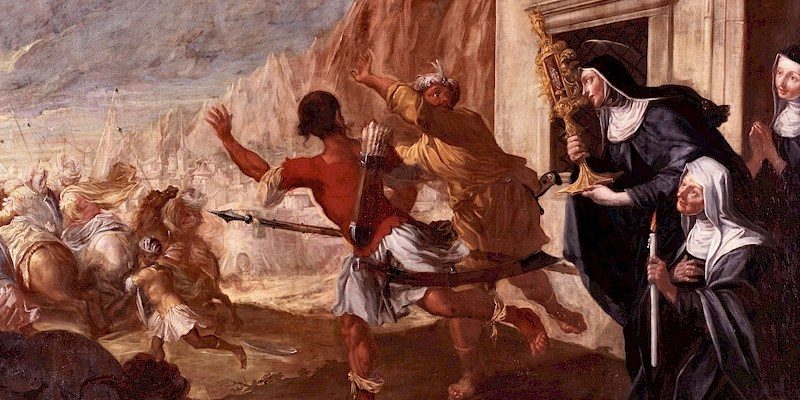 Regiments of Saracen soldiers and bowmen were stationed there (in the Convent of San Damiano in Assisi, Italy), massed like bees, ready to devastate the encampments and seize the cities. Once, during an enemy attack against Assisi, a city beloved of the Lord, and while the army was approaching the gates, the fierce Saracens invaded San Damiano, entered the confines of the convent and even the very cloister of the virgins. The women were in terror, their voices trembling with fear as they called out to their Mother, St. Clare. With a fearless heart, St. Clare commanded them to lead her, sick as she was, to the enemy, preceded by a silver and ivory case in which the Body of the Saint of Saints was kept with great devotion. And prostrating herself before the Lord, she spoke plaintively to her Christ: “Behold, my Lord, is it possible that Thou wouldst deliver into the hands of pagans Thy defenseless slaves, whom I have taught out of love for Thee? I pray Thee, Lord, protect these Thy slaves whom I cannot now save by myself.”
Suddenly a voice resounded in her ears from the tabernacle: “I will always protect you!”
“My Lord,” she added, “if it is Thy wish, protect also this city which is sustained by Thy love.’
Christ replied, “It will have to undergo many trials, but it will be defended by My protection.”
Then the virgin, raising a face bathed in tears, comforted the sisters: “I assure you, daughters, that you will suffer no evil; only have faith in Christ.”
Upon seeing the courage of the sisters, the Saracens took flight and fled back over the walls they had scaled, unnerved by the strength of the sister whom they saw praying. And Clare immediately warned those who heard the voice I spoke of above, ordering them sternly: “Take care not to tell anyone about that voice while I am still alive, dearest daughters.”