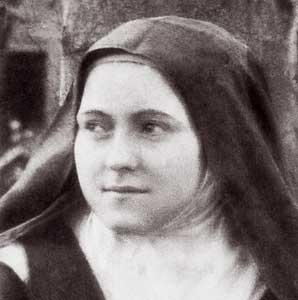 I get tired of the darkness all around me. The darkness itself seems to borrow, from the sinners who live in it, the gift of speech. I hear its mocking accents: ‘It’s all a dream, this talk of a heavenly country, of a God who made it all, who is to be your possession in eternity! All right, go on longing for death! But death will make nonsense of your hopes; it will only mean a night darker than ever, the night of mere non-existence!’”
.
When alone (I am ashamed to admit it) the recitation of the rosary is more difficult for me than the wearing of an instrument of penance. I feel I have said this so poorly! I force myself in vain to meditate on the mysteries of the rosary; I don’t succeed in fixing my mind on them. For a long time I was desolate about this lack of devotion which astonished me, for I love the Blessed Virgin so much that it should be easy for me to recite in her honor prayers which are so pleasing to her. Now I am less desolate; I think that the Queen of heaven, since she is my MOTHER, must see my good will and she is satisfied with it.
(From Story of a Soul)
.
Her temptations against Faith would extend eighteen months and only end moments before her death. She described these temptations as “ugly serpents hissing in my ears” or as clouds of “thickest darkness.” In a conversation with one of her former novices, she confided, “I would not even want to tell you the degree of blackness that is in my soul for fear of making you share in my temptations.”
.
It was this charitable caution that prevented the saint from putting down in too much detail the exact nature of her trials (though broad summaries do appear in all editions of her autobiography). Further understanding, however, can be gleaned from records of a conversation with her sister: “If you only knew what frightful thoughts obsess me. Pray very much for me so that I do not listen to the Devil who wants to persuade me about so many lies. It is the reasoning of the worst materialists that is imposed upon my mind.”
.
During these great temptations, she never wavered in her faith and resolutely offered everything “to obtain the light of faith for poor unbelievers, for all those who separate themselves from the Church’s beliefs.” Pope Benedict XVI later said of her heroic fidelity in these struggles: “With Mary beside the Cross of Jesus, Thérèse then lived the most heroic faith, as a light in the darkness that invaded her soul. The Carmelite was aware that she was living this great trial for the salvation of all the atheists of the modern world, whom she called ‘brothers’.”