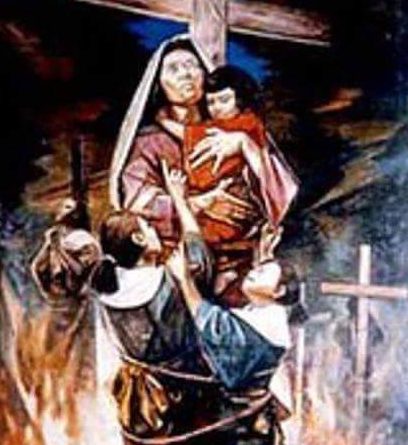 Recalling the martyrdom of 55 Catholics, on October 6, 1619. That day is called “The Great Kyoto Martyrdom”. There were more than 300,000 Catholics in Japan at that time. That is why the Shogun (highest military commander), fearing his authority was seriously in danger, decided, under the influence of his Buddhists advisers, to eliminate the Christians. In The Christian century in Japan (1951), one can read of an Englishman who was there, on that very day of October 6, 1619, and who describes how he saw ‘fifty-five persons of all ages and both sexes burnt alive on the dry bed of the Kamo River, and among them little children of five or six years old in their mothers’ arms, crying out, ‘Jesus, receive their souls!’ ” Here is the description of one of these executions:
.
“The ordeal was witnessed by 150,000, according to some writers, or 30,000 according to other and in all probability more reliable chroniclers. When the fagots were kindled, the martyrs said sayonara (farewell) to the onlookers who then began to entone the Magnificat, followed by the psalms Laudate pueri Dominum and Laudate Dominum omnes gentes, while the Japanese judges sat on one side ‘in affected majesty and gravity, as in their favorite posture’. Since it had rained heavily the night before, the faggots were wet and the wood burnt slowly; but as long as the martyrdom lasted, the spectators continued to sing hymns and canticles. When death put an end to the victims’ suffering, the crowd intoned the Te Deum.”
.
These 55 Martyrs are among the 188 Martyrs that were declared Venerable last June 1, 2007, and should be beatified in the very near future. And among them is this heroic family of John Hashimoto Tahyôe, his wife Thecla and their five children, Catharina 13, Thomas 12, Franciscus 8, Petrus 6 and Ludovica 3. During the execution, the fire actually freed Catharina who was tied to a separate cross at a short distance from the cross where her mother and the 3 youngest children were tied together. She ran to her mother saying, ‘Mother, I can’t see!’ Her mother replied, ‘pray to Jesus and Mary’. The last thing bystanders saw of the mother was that she was drying tears from her 3 year old baby who was in her arms. After the flames and the smoke abided, the mother was still seen holding her youngest, tight in her arms, both dead. The image of them offering their lives along with those of their children became a symbol of the martyrdom of the Japanese Church.