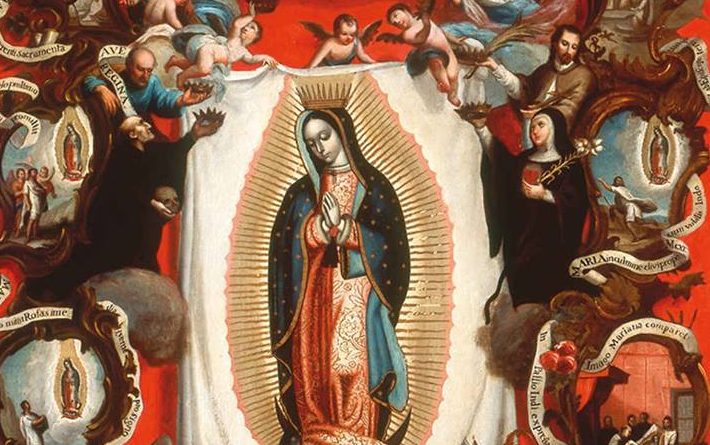 One day Saint Gertrude saw Our Lord counting gold coins. She summoned the courage to ask Him what He was doing. He answered: “I am counting the Hail Mary’s that you have said; this is the money with which you can pay your way to Heaven.”
.
The Sinner Bouquet to the Blessed Virgin
.
It is related in the life of the Curé d’Ars that on one occasion, a lady, a perfect stranger to him, asked him to pray for her husband, a careless Catholic, who had just died suddenly and without receiving the Sacraments. “He was so careless, Father,” she said, weeping; “he did not go to his duties, and whatever will become of him?” “Madam,” replied the saintly Priest, “do you not remember the bouquet of flowers he picked every Saturday to decorate Our Lady’s Altar? In return Our Blessed Lady obtained for him the Grace to make an Act of Perfect Contrition before dying, and he is saved. This filled the woman with true happiness and love for the Mercy of Our Lord and Lady.
.
How A Sinful Priest Was Saved From God’s Justice Through Mary
.
When St. Francis Borgia was in Rome, an ecclesiastic came to speak with him; but the saint being much occupied, sent Father Acosta to him. The ecclesiastic said to him: “Father, I am a Priest and a preacher, but I live in sin, and distrust the Divine Mercy. After preaching a sermon one day against the obstinate, who afterwards despair of pardon, a person came to me to make his Confession, who narrated to me all my sins, and at length told me that he despaired of the Divine Mercy. In order to do my duty, I told him that he must change his life, and trust in God; then that penitent rose to his feet and reproached me, saying: And you, who preach thus to others, why do you not amend, and why do you distrust? Know, said he, that I am an Angel come to your aid; amend and you will be pardoned. And when he had said this he disappeared. I abstained for several days from my sinful practices, but when temptation came I again returned to my sins. On another day, as I was celebrating Mass, Jesus Christ sensibly spoke to me from the Host, and said: Why dost thou thus maltreat Me, when I treat thee so well? After this I resolved to amend, but at the next temptation fell again into sin. A few hours ago, a youth came to me in my apartment, and drew from under his mantle a chalice, and from this a Consecrated Host, saying: Do you know this Lord whom I hold in my hand? Do you remember how many favours He has done you? Now behold the punishment of your ingratitude, and saying this he drew a sword to kill me. I then cried: For the love of Mary do not kill me, for I will indeed amend. And then he said: This was the only thing you could have said to save yourself: make a good use of this Grace, for this is the last mercy for you. When he had said this he left me, and I came immediately here, praying you to receive me among you.” Father Acosta consoled him, and the Priest, by the advice also of St. Francis, entered another order of strict observance, where he persevered in Holiness till his death.
.
The Power of the Stabat Mater