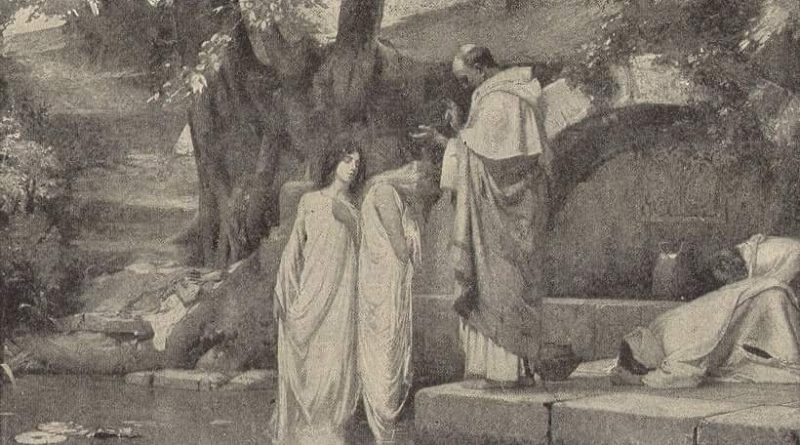 Sacrament: Baptism
.
King Leogaire of Ireland had two daughters, like roses growing in a rose-bed. And the one was of a ruddy complexion, and she was called Ethne; and the other was fair, and she was called Fedella; and they were educated by magicians their whole lives as their father the King was Pagan. And early on a certain morning, the sun having just arisen, they went to bathe in a clear fountain, on the margin where of they found the saint sitting with other holy men; and regarding his countenance and garb, they were struck with wonder, and asked him many questions, “Who are ye, and whence do ye come? Are ye phantoms, or fairies, or friendly mortals?” they even offered their bodies to him for sex thinking Saint Patrick was a god. But the saint admonished them rather to believe in his God than to enquire of his descent or his dwelling-place. And then Ethne broke forth into the questions:
.
“Who is God?”
“And where is God?”
“Where is His dwelling?”
“Has He sons and daughters?”
“Is He rich in silver and gold?”
“Is He everlasting? is He beautiful?”
“Are His daughters dear and lovely to the men of this world?”
“Is He on the heavens or on earth?”
“In the sea, in rivers, in mountains, in valleys?”
“Make Him known to us. How is He to be seen?”
“How is He to be loved? How is He to be found?”
“Is it in youth or is it in old age that He may be found?”
.
But St. Patrick, filled with the Holy Ghost, made answer:
.
“God, whom we announce to you, is the Ruler of all things.”
“The God of heaven and earth, of the sea and the rivers.”
“The God of the sun, and the moon, and all the stars.”
“The God of the high mountains and of the lowlying valleys.”
“The God who is above heaven, and in heaven, and under heaven.”
“His dwelling is in heaven and earth, and the sea, and all therein.”
“He gives breath to all.”
“He gives life to all.”
“He is over all.”
“He upholds all.”
“He gives light to the sun.”
“He imparts splendour to the moon.”
“He has made wells in the dry land, and islands in the ocean.”
“He has appointed the stars to serve the greater lights.”
“His Son is co-eternal and co-equal with Himself.”
“The Son is not younger than the Father.”
“And the Father is not older than the Son.”
“And the Holy Ghost proceeds from them.”
“The Father and the Son and the Holy Ghost are undivided.”
.
“But I desire by Faith to unite you to the Heavenly King, as you are daughters of an earthly king.”he also unto them that they should exchange an earthly and transitory kingdom for a heavenly and eternal kingdom; for that if they obeyed his counsel, they should unite with the Celestial King in pure and indissoluble union. And when he had thus preached unto them with persuasive eloquence, the damsels believed in Christ, and he baptized them even in that fountain. Thus being made Christians, they besought the saint that according to his promise he would show unto them the face of Christ, their beloved Spouse. And the saint thus answered: “Ye must first, with the mouth of your heart and of your body, devoutly receive the flesh and the blood of your Spouse, so that, being quickened with the living food, and having tasted of death, ye may pass from this impure world unto the starry bride-chamber.” Then the virgins, believing in the word of the man of God, devoutly entreated and received the Eucharist, and, immediately falling asleep in the Lord, they quitted their earthly tabernacles, and went unto their heavenly Spouse. And their friends and their kindred gathered together and bewailed them for three days, as was the custom of the country, and returned their sacred remains unto the womb of the mother of all human kind. And on that spot was erected a church, which is now collated to the metropolitan seat of Ardmachia. And the two magicians, for that they had educated the damsels, were sorely grieved at their deaths, and reproached the saint with bitter and angry words; but he, touching the harp of David, and preaching unto them the kingdom of God, converted them unto the faith, and they were baptized as well.