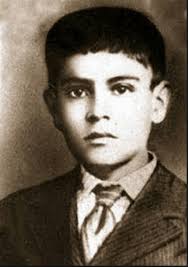 “I am resigned to the Will of God. I die happy because I die beside Our Lord. Do not afflict yourselves because of my death, since to die for God gives me joy.”(Jose Sanchez Letter to his mother before his execution)
.
On the day of his execution, Fourteen year old Blessed Jose Sanchez del Rio was already beaten and severely tortured by the soldiers of the Masionic government of Mexico who was at war with Christ Church at the time. When he got to the cemetery, he was bleeding heavily. His torturers had cut off the soles of his feet and forced him to walk on salt to torture him further. The boy screamed with pain but would not give in. As the road was nothing but rocks and dirt, the stones where he had walked were soaked in his blood. he told his torturers instead of hating them “I forgive you since we are all Christians. We’ll see each other in heaven. I want you all to repent.” The soldiers far from being moved to pity mocked him and offered him a chance to live. The soldiers said: “If you shout, ‘Death to Christ the King’, we will spare your life.” He only answered: Filled with Righteous anger and love for Jesus and Mary he proclaimed in a voice full of authority “Long live Christ the King! Long live Our Lady of Guadalupe!”” The commander ordered the soldiers to bayonet Jose. They pierced his body and instead of screams of pain he continuously cried out with every stab louder and louder: “Viva Cristo Rey!” The commander was so enraged that he pulled out his pistol and shot him through the head. Before his last breath and what many consider a miracle the great Martyr drew a cross in the dirt and kissed it. His martyrdom was on February 10, 1928. The commander who killed Blessed Jose in his rage having failed to turn the execution into a deterrent, but rather created a great triumph for the Followers of our Lord and Lady.
(The testimony was given by his friends who witnessed his execution)