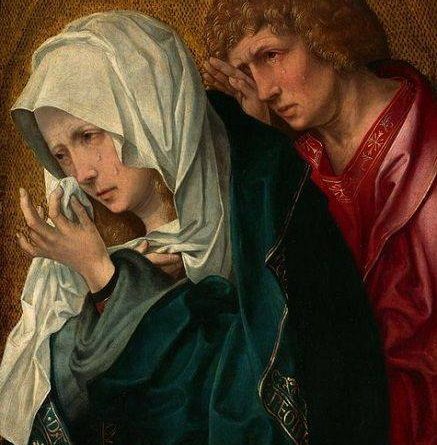 When Brother Conrad and the aforenamed Brother Peter, the two shining lights of the custody of Ancona, were living together in the Convent of Forano, such love and charity existed between them that they seemed to have but one heart and one soul; and they would make known to each other and share every mercy which the Lord should send them. Having made this agreement, it happened one day, as Brother Peter was praying, devoutly meditating on the Passion of Christ, and how his Blessed Mother, with St John the Evangelist and St Francis, were represented at the foot of the cross, as having been crucified with Christ in mental sufferings, he felt a great wish to know which of the three had suffered the greatest sorrow on account of the Passion of Christ – the Mother who had given him birth, the disciple who had laid his head on his bosom, or St Francis, who was, as it were, crucified with him. As he was meditating on this, the Virgin Mary appeared to him, with St John the Evangelist and St Francis, all clothed in the heavenly garb of glorified souls; and St Francis seemed to be dressed more richly than St John. At this vision Brother Peter was greatly terrified, but St John comforted him by saying: “Fear not, dear brother; for we are come to enlighten thee in thy doubt: know, then, that the Mother of Christ, and I, his disciple, have suffered above every other creature at his Passion, and after us St Francis has suffered more than all others, and this is why thou seest him in such glory.” And Brother Peter said: “Why then, most holy Apostle of Christ, are the vestments of St Francis more beautiful than thine?” “Because,” answered St John, “when he was in the world, he wore a humbler dress than I.” And having said these words, he gave to Brother Peter a glorious vestment that he had in his hand, saying: “Take this dress which I have brought for thee.” Then St John being about to put it on him, Brother Peter fell down in terror, and began to cry out: “Brother Conrad, Brother Conrad, haste thou to help me! come and see most wonderful things!” And as he said these words, the vision disappeared. Then Brother Peter related to Brother Conrad all he had seen, and they together returned thanks to God.