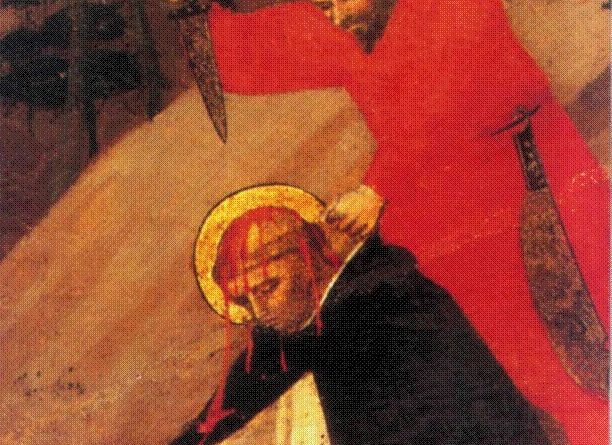 (Taken from The Life of St. Peter of Verona, Collected in Acta Sanctorum, Aprilis vol. iii, 702 B)
.
“At that time, Peter Verona was roaming around preaching throughout Lombardy and Tuscany and Romagna, it happened that he heard in confession a certain adolescent, feeling pricked to repentance by his teaching. And among the rest of his sins, he confessed that he had kicked his mother around with his foot.
.
But the saint, shuddering at the crime, argued against him with bitter tears, showing him the seriousness of his wicked deed.
.
Shaken by his word and example, he asked, “What do you ask me to do, Father, in satisfaction for my disgraceful act? Look, I am ready for anything.”
.
“Surely,” said the holy man, “this foot which was the instrument of such impiety deserved to be cut off; and as when Christ said in the Gospel, ‘If… your foot causes you to stumble, cut it off, and throw it away from you.”* Yet I do not say that you should do this. So beware in the future. Do such and such a penance for satisfaction [of the sin].”
.
The adolescent went away with no moderate zeal for avenging the accomplished departure [from what is right], but of course not according to understanding. Returning home, he got a dagger (not a small one) and in a boiling passion of spirit, cut off his foot. Intense pain followed, which did not remove or diminish his fervor. He screamed from pain, and the noise was heard, and his blood poured copiously onto the ground.
.
His mother quickly ran to him. She noticed the cut off foot pouring out blood, and putting the distress away as if outside her, she called out to her female friends and neighbors. They hurried to help, totally filled with astonishment. Not knowing the cause of the matter, they exerted themselves to staunch the blood flow soonest. And having applied what care could be given, they questioned the adolescent how and for what reason he had done this to himself.
.
The youth responded that he had confessed himself to that preacher Peter, and among the rest of his sins, about spurning his mother with his heel; which sin he had shown him was so enormous, that it had not looked to the adolescent that he could satisfy it sufficiently unless by punishing the foot through cutting it off.
.
The mother lamented; her familiar friends joined in; the neighborhood was filled with whispers insulting Father Peter and the convent, holding the Brothers, who would impose the penance of cutting off feet upon adolescents, to be indiscreet and fatuous. Hurriedly, they proceeded to the convent; they called out the Prior. They set forth their complain against Father Peter; they explained the case.
.
This was set forth to the holy man. He justified himself; he had not imposed such a work. But to make provision for the simplicity of the adolescent, he ordered him to be brought to him, along with the cut off foot.
.
When this was done, after sending ahead a prayer, he joined the cut off foot and fastened it to the tibia in the place where it had been cut. And instantly, it was grafted on and the tibia was incarnated with the foot, and it was as if nothing had been cut there. And those who were in attendance seeing it, they glorified God who gave such power to human beings, and turned the simple fatuity of a youth into glory for his saint.”