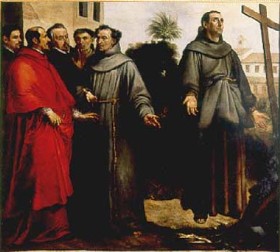 Patronage: Roman Catholic Diocese of San Diego, Franciscan lay brothers
.
Saint Didacus was born in Andalusia in Spain, towards the beginning of the fifteenth century. He was remarkable from childhood for his love of solitude, and for conversations concerning holy things. When still young he retired to live with a hermit not far from his village, where he spent several years in vigils, fasting, and manual work. Like the Fathers of the desert, he made baskets and other objects with willow branches and gave them to those who brought alms to the two hermits.
.
God inspired him to enter into the Order of the seraphic Saint Francis; he did so at the convent of Arrizafa, not far from Cordova. He did not aspire to ecclesiastical honors, but to the perfection and inviolable observance of his Rule — an admirable ideal, the practice of which, according to Saint Thomas Aquinas, is equivalent to martyrdom in merit. He made himself the servant of all his brethren. Any occupation was his choice. All his possessions were a tunic, a crucifix, a rosary, a prayer book and a book of meditations; and these he did not consider as his own and wanted them to be the most worn of all that were in the house. He found ways to nourish the poor who came to the convent, depriving himself of bread and other food given him, and if unable to do so consoled them with such gentle words that they left with profit nonetheless.
.
At one time he was sent by his superiors to the Canary Islands, and went there joyfully, hoping to win the crown of martyrdom. Such, however, was not God’s Will. After making many conversions by his example and holy words, he was recalled to Spain. He was assigned to the care of the sick and when he went to Rome for the Jubilee year of 1450, with 3,800 other religious of his Order, most of whom fell ill there, he undertook to care for them, succeeding in procuring for them all they needed even in that time of scarcity.
.
Saint Didacus one day heard a poor woman lamenting, and learned that she had not known that her seven-year-old son had gone to sleep in her large oven; she had lighted a fire, and lost her senses when she heard his cries. He sent her to the altar of the Blessed Virgin to pray and went with a large group of persons to the oven; although all the wood was burnt, the child was taken from it without so much as a trace of burns. The miracle was so evident that the neighbors took the child in triumph to the church where his mother was praying, and the Canons of the Church dressed him in white in honor of the Blessed Virgin. Since then, many afflicted persons have invoked the Mother of Heaven there.
.
After a long and painful illness, Saint Didacus ended his days in 1463, embracing the cross which he had so dearly loved during his entire life. He died having on his lips the words of the hymn, Dulce lignum sweet wood – a chant of Good Friday]. His body remained incorrupt for several months, exposed to the devotion of the faithful, ever exhaling a marvelous fragrance. He was canonized in 1588; Philip II, king of Spain, had labored to obtain that grace after his own son was miraculously cured in 1562 by the relics of the Saint, when he had fallen from a ladder and incurred a mortal wound on his head.
.
Reflection: If God be in your heart, He will be also on your lips; for Christ has said, Out of the abundance of the heart the mouth speaketh.
.
Prayer to Venerate Any Saint
.
Saint Didacus :Feast Day November 13
.
Rev. 8:3-4 [3] And another angel came, and stood before the altar, having a golden censer; and there was given to him much incense, that he should offer of the prayers of all saints upon the golden altar, which is before the throne of God. [4] And the smoke of the incense of the prayers of the saints ascended up before God from the hand of the angel.
.
ETERNAL Father, I wish to honor St. (Name), and I give You thanks for all the graces You have bestowed upon him (her). I ask You to please increase grace in my soul through the merits of this saint, and I commit the end of my life to him (her) by this special prayer, so that by virtue of Your goodness and promise, St. (Name) might be my advocate and provide whatever is needed at that hour. Amen.
.
PROMISE: “When you wish to honor any particular saint and give Me thanks for all the graces I have bestowed on that saint, I increase grace in your soul through the merits of that saint. When you commit the end of your life to any of the saints by special prayers, I appoint those saints to be your advocates and to provide whatever you need at that hour.”-Our Lord to St. Gertrude
.
Blessed Anne Catherine Emmerich revealed in her Visions that saints are particularly powerful on their feast days and should be invoked then.