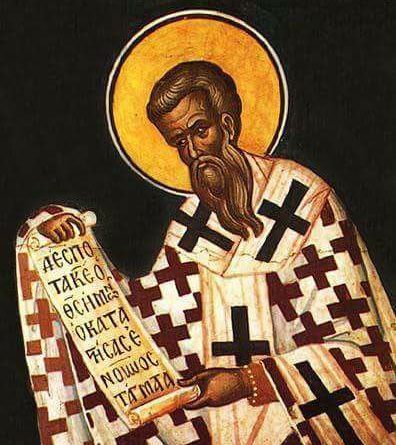 Saint Gregory was born in 312 near Caesarea of Cappadocia, of parents who are both honored as Saints, and the infant was immediately consecrated to God. After learning all that he could in his native land, he journeyed to Caesarea in Palestine to study at the famous school founded by Origen, then went to Alexandria in Egypt to rejoin his brother there. After some time he embarked for Athens, the metropolis of the sciences and the humanities. During the voyage, a storm of twenty days’ duration nearly caused the loss of the ship and all passengers; their safe arrival in Athens was attributed to Saint Gregory’s prayers, and all aboard adopted Christianity.
.
In Athens he met and became the close friend of Saint Basil, and these noble souls turned away together from the most attractive worldly prospects. For some years they lived in seclusion, self-discipline, and studious labor, knowing only two roads, Gregory wrote, one to church, the other to school. Only after thirty years of studies and good works in Athens did they leave that city and separate. They would meet again in the year 358, to live in solitude for a time in the Province of Pont.
.
Saint Gregory was raised to the priesthood almost by force, preaching his first sermon, after a ten-weeks’ retreat, on the dangers and responsibilities of the priesthood. In 372, when he was sixty years old, he was consecrated a bishop by his dear friend Saint Basil, who had become Archbishop of Caesarea in Cappadocia. All their lives they would correspond; many of Saint Gregory’s noble and eloquent letters to Saint Basil can still be read among the 212 pieces of his correspondence which are still conserved.
.
Saint Gregory’s rare gifts and conciliatory disposition had become well known. In the year 379, when he was sixty-seven years old, he was chosen to be Patriarch of Constantinople. That city was distracted and laid waste in those times by Arian and other heretics. After a reception which was at best lukewarm, the new Patriarch labored there successfully, from his base in a small church named the Anastasia (Resurrection), where he gave instructions and saw the number of his listeners increase daily.
.
The Arians were so irritated at the decay of their heresy that they pursued the Saint with outrage, calumny and violence, and at length resolved to take his life. For this purpose they chose an intrepid youth who was willing to undertake the sacrilegious commission. But God did not allow him to carry it out; he was touched with remorse and cast himself at the Saint’s feet, avowing his sinful intent. Saint Gregory forgave him at once, treated him with all kindness and received him among his friends, to the wonder and edification of the whole city and to the confusion of the heretics, whose crime had served only as a mirror to the virtue of the Saint.
.
Saint Jerome states that he himself learned at the feet of this master, who was his catechist in Holy Scripture. But Saint Gregory’s humility, his austerities, the humble appearance of his aging and worn person, and above all his very success in Constantinople, did not cease to draw down upon him the hatred of every enemy of the Faith. He was persecuted by the magistrates, stoned by the rabble, and thwarted and deserted even by his brother bishops. During the second General Council, hoping to restore peace to his tormented city, the eloquent bishop, whom the Church calls Saint Gregory the Theologian, resigned his see and retired to his native town, where he died in the year 390.
.
Reflection. We must overcome our enemies, said Saint Gregory, by gentleness, and win them over by forbearance. Let them be punished by their own conscience, not by our wrath. Let us not at once fell the fig tree, from which a more skillful gardener may yet entice fruit.
.
Prayer to Venerate Any Saint
.
Saint Gregory Nazianzen: Feast Day May 9
.
I desire therefore, first of all, that supplications, prayers, intercessions, and thanksgivings be made for all men: For kings, and for all that are in high station: that we may lead a quiet and a peaceable life in all piety and chastity. For this is good and acceptable in the sight of God our Saviour, Who will have all men to be saved, and to come to the knowledge of the truth.
(1 Timothy 2:1-4)
.
And another angel came, and stood before the altar, having a golden censer; and there was given to him much incense, that he should offer of the prayers of all saints upon the golden altar, which is before the throne of God. And the smoke of the incense of the prayers of the saints ascended up before God from the hand of the angel. (Rev. 8:3-4)
.
ETERNAL Father, I wish to honor St. (Name), and I give Thee thanks for all the graces Thou have bestowed upon him (her). I ask Thee to please increase grace in my soul through the merits of this saint, and I commit the end of my life to him (her) by this special prayer, so that by virtue of Thine goodness and promise, St. (Name) might be my advocate and provide whatever is needed at that hour. Amen.
.
PROMISE: “When you wish to honor any particular saint and give Me thanks for all the graces I have bestowed on that saint, I increase grace in your soul through the merits of that saint. When you commit the end of your life to any of the saints by special prayers, I appoint those saints to be your advocates and to provide whatever you need at that hour.”-Our Lord to St. Gertrude
.
Blessed Anne Catherine Emmerich revealed in her Visions that saints are particularly powerful on their feast days and should be invoked then.