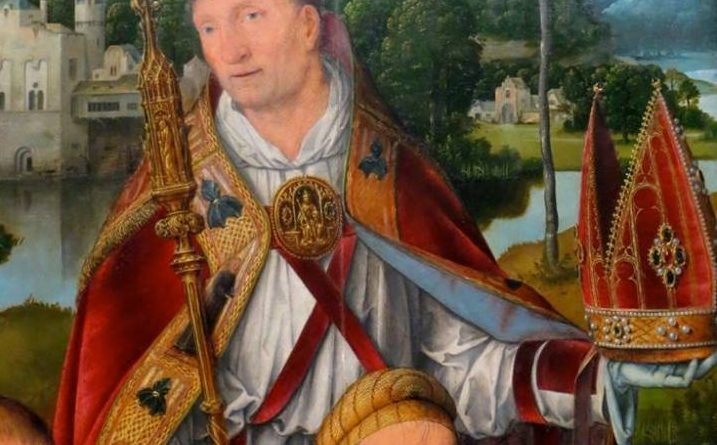 Patronage: smallpox
.
In the fifth century an army of Vandal barbarians from Germany, while ravaging part of Gaul, plundered the city of Rheims. Nicasius, its holy bishop, an emissary of peace, justice and charity, had foretold this calamity to his flock; for the city of Rheims, which for a long time had been docile to his word, little by little was seen by the afflicted pastor to be sinking into vice and corruption. He endeavored to waken them to penance: Weep, lament in sackcloth and ashes, unfortunate flock, for God has numbered your iniquities, and if you do not do penance, dreadful punishments are going to come upon you! But his words were unheeded.
.
When Saint Nicasius saw the enemy at the gates and in the streets, forgetting himself and solicitous only for his spiritual children, he went from door to door encouraging everyone to patience and constancy, and awakening in each breast the most heroic sentiments of piety and religion. By endeavoring to save the lives of his flock, he exposed himself to the sword of the infidels, who indeed slew him, while he was praying on his knees the words of a Psalm: Lord, my soul has been as though fastened to the earth; Lord, give me life, according to Your word! Florens, his deacon, and Jocond, his lector, were massacred by his side. His sister Eutropia, a virtuous and beautiful virgin, fearing she might be reserved for a fate worse than death, boldly cried out to the infidels that it was her unalterable resolution to sacrifice her life rather than her faith or her virtue. In reply, they dispatched her with their cutlasses, and continued their massacre.
.
Then, suddenly, a strange and terrible noise was heard in the Church of Notre-Dame, and the alarmed barbarians took flight without taking time to pillage the houses or burn the city, or even take the booty they had already amassed.
.
When the city’s inhabitants who had fled to the mountains of the region felt it was safe to return, having seen an unexplained flame above the place of the torment and heard what seemed to be an angelic concert in that area, they went with the intention of piously burying the remains of the slain, and they found there Saint Nicasius, their bishop, his assistants, and Saint Eutropia. Many miracles occurred at their tomb.
.
Reflection: Bear patiently and with gentleness bodily sufferings, and prepare for the time of trial which is sure to come, by courageous endurance of the daily crosses which inevitably attend your state.
.
Prayer to Venerate Any Saint
.
Saint Nicasius and his companions: Feast Day December 14
.
Rev. 8:3-4 [3] And another angel came, and stood before the altar, having a golden censer; and there was given to him much incense, that he should offer of the prayers of all saints upon the golden altar, which is before the throne of God. [4] And the smoke of the incense of the prayers of the saints ascended up before God from the hand of the angel.
.
ETERNAL Father, I wish to honor St. (Name), and I give You thanks for all the graces You have bestowed upon him (her). I ask You to please increase grace in my soul through the merits of this saint, and I commit the end of my life to him (her) by this special prayer, so that by virtue of Your goodness and promise, St. (Name) might be my advocate and provide whatever is needed at that hour. Amen.
.
PROMISE: “When you wish to honor any particular saint and give Me thanks for all the graces I have bestowed on that saint, I increase grace in your soul through the merits of that saint. When you commit the end of your life to any of the saints by special prayers, I appoint those saints to be your advocates and to provide whatever you need at that hour.”-Our Lord to St. Gertrude
.
Blessed Anne Catherine Emmerich revealed in her Visions that saints are particularly powerful on their feast days and should be invoked then