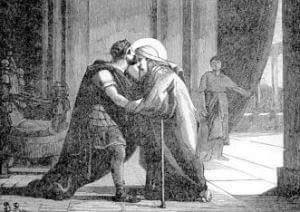 The holy monk Paphnutius was an Egyptian who, after having spent several years in the desert under the direction of the great Saint Anthony, was made bishop in Upper Thebaid. He was one of the confessors under the tyrant Maximin Daia, who lost their right eye and were afterward sent to work in the mines.
When peace was restored to the Church, Paphnutius returned to his diocese and his flock. The Arian heresy was entering into Egypt, and he was seen to be one of the most zealous defenders of the Catholic Faith. For his eminent sanctity and his glorious title of confessor, that is, one who had confessed the Faith before the persecutors and under torments, he was highly esteemed at the great Council of Nicea in 325. Constantine the Great, during the celebration of that synod, sometimes conferred privately with him in his palace, and never dismissed him without kissing respectfully the place which had once held the eye he had lost for the Faith.
Saint Paphnutius remained always in close union with Saint Athanasius, and accompanied him to the Council of Tyre in 355. We have no particular account of the death of Saint Paphnutius, but his name is recorded in the Roman Martyrology on the 11th of September.
Prayer to Venerate Any Saint
Saint Paphnutius : Feast Day September 11
Rev. 8:3-4 [3] And another angel came, and stood before the altar, having a golden censer; and there was given to him much incense, that he should offer of the prayers of all saints upon the golden altar, which is before the throne of God. [4] And the smoke of the incense of the prayers of the saints ascended up before God from the hand of the angel.
ETERNAL Father, I wish to honor St. (Name), and I give You thanks for all the graces You have bestowed upon him (her). I ask You to please increase grace in my soul through the merits of this saint, and I commit the end of my life to him (her) by this special prayer, so that by virtue of Your goodness and promise, St. (Name) might be my advocate and provide whatever is needed at that hour. Amen.
PROMISE: “When you wish to honor any particular saint and give Me thanks for all the graces I have bestowed on that saint, I increase grace in your soul through the merits of that saint. When you commit the end of your life to any of the saints by special prayers, I appoint those saints to be your advocates and to provide whatever you need at that hour.”-Our Lord to St. Gertrude
Blessed Anne Catherine Emmerich revealed in her Visions that saints are particularly powerful on their feast days and should be invoked then.