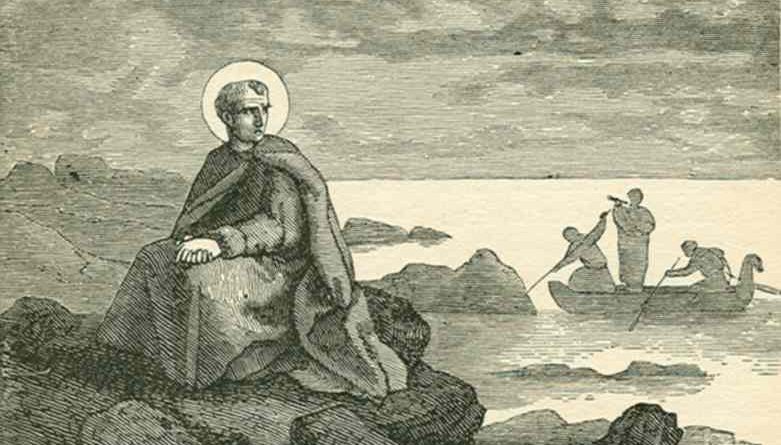 Silverius was son of Pope Hormisdas, who had been married before he entered the ministry. Upon the death of Saint Agapetas, and after a vacancy of forty-seven days, Silverius, then subdeacon, was elected Pope and consecrated on the 8th of June, 536, despite maneuvers on the part of heretics opposed to the Council of Chalcedon.
.
The heretical empress Theodora, resolved to win Silverius over to her interests, wrote to him, ordering that he should either acknowledge as lawful bishop the Eutychian heretic Anthimus, who had been deposed as patriarch of Constantinople, or come in person to Constantinople and reexamine his cause. Without the least hesitation or delay, Silverius returned her a short answer, by which he gave her to understand that he neither could nor would obey her unjust demands, which would be to countermand his predecessor’s decision and betray the cause of the Catholic faith.
.
The empress, finding that she could expect nothing from him, resolved to have him deposed. Vigilius, archdeacon of the Roman Church, a man of diplomacy, was then at Constantinople. To this ambitious ecclesiastic the empress exposed her wishes, and promised to make him pope and to bestow on him seven hundred pieces of gold, if he would engage himself to condemn the Council of Chalcedon and receive into Communion the three deposed Eutychian patriarchs. Vigilius assented to these conditions, and the empress sent him to Rome, charged with a letter to the Roman general Belisarius, commanding him to drive out Silverius and contrive the election of Vigilius to the pontificate.
.
Vigilius urged the general to execute this project. In order to implement it, the Pope was accused of corresponding with the enemy, and a forged letter was produced, supposedly written by him to the king of the Goths, inviting him to the city and promising to open the gates to him. These dealings succeeded; Vigilius was made Pope, and Silverius was banished to Patara in Lycia.
.
The bishop of Patara received the illustrious exile with all possible marks of honor and respect, and thinking himself bound to undertake his defense, journeyed to Constantinople and spoke boldly to the emperor Justinian. He terrified him with threats of divine judgments for the expulsion of a bishop of so great a see, telling him, There are many kings in the world, but there is only one Pope over the Church of the whole world. Justinian appeared startled at the atrocity of the proceedings and gave orders that Silverius be sent back to Rome. The enemies of the Pope contrived to prevent this, however, and he was intercepted on his road toward Rome and transported to the deserted island of Palmeria, where he died of hunger a year later, on the 20th of June, 538 and was buried.
.
It was perhaps in response to the martyred pope’s prayers that after his death the usurper of the pontifical throne, Vigilius, though he had wished to step down, was forced to remain in function and then transformed, like Saul of Tarsus, into another man. He exercised the pastoral duties with as much courage, piety, zeal and faith, as he formerly had used violence, avarice and cruelty during his predecessor’s lifetime. The traitor Belisarius was accused of conspiracy against the emperor, stripped of all he had, and his eyes put out; he was obliged to beg for alms in Constantinople. But he too repented and built a church with an inscription over the door which was a public reparation for his fault.
.
Prayer to Venerate Any Saint
.
Saint Silverius: Feast Day June 20
.
I desire therefore, first of all, that supplications, prayers, intercessions, and thanksgivings be made for all men: For kings, and for all that are in high station: that we may lead a quiet and a peaceable life in all piety and chastity. For this is good and acceptable in the sight of God our Saviour, Who will have all men to be saved, and to come to the knowledge of the truth.
(1 Timothy 2:1-4)
.
And another angel came, and stood before the altar, having a golden censer; and there was given to him much incense, that he should offer of the prayers of all saints upon the golden altar, which is before the throne of God. And the smoke of the incense of the prayers of the saints ascended up before God from the hand of the angel.
(Rev. 8:3-4)
.
ETERNAL Father, I wish to honor St. (Name), and I give Thee thanks for all the graces Thou has bestowed upon him (her). I ask Thee to please increase grace in my soul through the merits of this saint, and I commit the end of my life to him (her) by this special prayer, so that by virtue of Thy goodness and promise, St. (Name) might be my advocate and provide whatever is needed at that hour. Amen.
.
PROMISE: “When you wish to honor any particular saint and give Me thanks for all the graces I have bestowed on that saint, I increase grace in your soul through the merits of that saint. When you commit the end of your life to any of the saints by special prayers, I appoint those saints to be your advocates and to provide whatever you need at that hour.”-Our Lord to St. Gertrude
.
Blessed Anne Catherine Emmerich revealed in her Visions that saints are particularly powerful on their feast days and should be invoked then