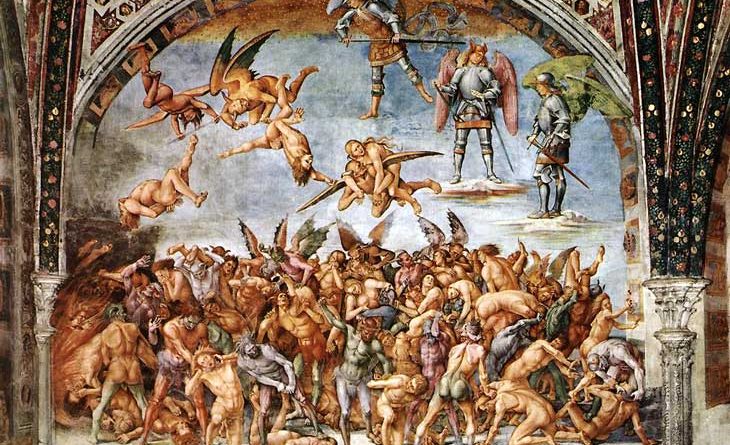 “One morning, making a spiritual Communion, I felt the same effect of a sacramental Communion and was ravished in ecstasy. I remember that God entrusted to me, in a special way, all priests, but above all those who were in the disgrace of God, since there are many, oh, there are so many !
And another time, in another ecstasy, the Virgin Mary said to her: “Daughter, there are Christians who live like the beasts; there is no longer faith in the faithful; they live as if God does not exist; and my Son is holding the scourge in hand to punish them… Oh, how many priests, then, and how many religious (male & female) offend God!
All of them stomp on the Sacraments, scorn the Most Precious Blood of Jesus and they keep it under their feet (they trample upon it). These people infect the Communities, entire cities; they are like the plague-stricken, they have the name of Christians, but they are worse than the infidels.
Daughter, pray, fast and do penance, and have all the others do the same, so that God will put down the scourge.” One day the Virgin Mary described to Saint Veronica certain places in Hell:
“Daughter, I want you to describe the seven sites, the most painful, that are in Hell, and for whom they exist.
The first is the location where Lucifer is shackled, and with him is Jude, who serves as his chair (seat), and there are all those who were followers of Jude.
The second is the location where all the ecclesiastics (clergy / clerics) and the prelates of Holy Church, since being elevated in dignity and honors they have most perverted the faith, trampling the Blood of Jesus Christ, my Son, with many enormous sins.
In the third location that you saw, there are all the souls of the male religious and the female religious.
In the fourth, there are all the confessors, for having misled the souls of their penitents.
In the fifth, there are all the souls of judges and of the governors of justice.
The sixth location, instead, is that one destined for all the superiors (Mother Superiors/Father Superiors) of the religious.
In the seventh, lastly, there are all those who wanted to live according to their own volition and have committed every sort of sin, especially carnal sins.”
On another occasion, the Virgin turned to the Saint saying to her: “In a moment of rapture, you were brought into Hell to undergo new sufferings and, upon your arrival; you saw that many souls were plummeting down, and each one had their own place of torment.
It was made known to you that these souls were from various nations, from all sorts of states, that is, of Christians and of infidels, of religious and of priests.
These last ones are closer to Lucifer, and they suffer so much that the human mind cannot comprehend it.
Upon the arrival of these souls, all of Hell celebrates and, in an instant, they experience all the torments of the damned for offending God.”