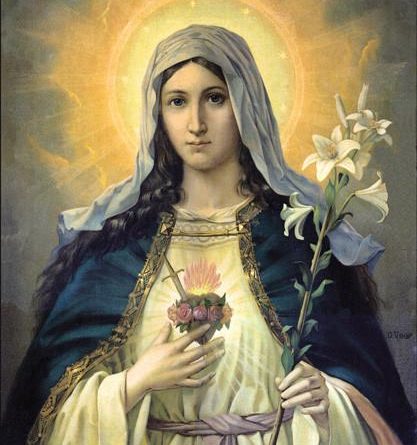 In 1917 the Mother of God appeared six times at Fatima in Portugal. After showing the three children a vision of hell, She informed Lucy of Fatima, the oldest of the visionaries: You have seen hell, where the souls of poor sinners will go. To save them, the Lord desires to establish devotion to My Immaculate Heart in the world. The Saviour Himself, when He appeared to Lucy again on December 10, 1925 with His Mother, indicating with His hand the Heart of His Mother, said: Have pity on this gentle Heart, continually martyred by the ingratitude of men.
Christians have long known that at the very origin of the world God threatened the ancient enemy, disguised under the form of a serpent, that the Woman he had seen in vision with Her Son, the Son of God, would eventually crush his head. I Myself, God told him, will place an irreducible enmity between Her race and your race. Thus Satan was informed at that moment, after he had just seduced the first human couple, that in the end, it would be this other Woman and Her Son, who would vanquish him. He had refused to honor the incarnate Son of God in His future human nature, inferior to his own angelic nature; his pride would not permit him to abase himself to serve God in that form. Christian hope has been nourished ever since by the prospect of this victory; nonetheless, the Mother of God wanted the twentieth century from its early years to understand that the time was drawing near when Her Immaculate Heart would triumph, as She explicitly said at Fatima, but that it was only through Her, uniquely by Her maternal aid, that this victory could be attained.
Mary is indispensable to the sanctification of each soul. This is the great truth which in the Latter Times must be better understood. For that purpose, consecration to Her Immaculate Heart was given us at Fatima, as the means She Herself desired, with the daily Rosary. Devotion to Her Heart is not new in the Church; Saint John Eudes, Saint Louis Mary de Montfort, how many others, in truth all the Saints have loved the Heart of their Mother in Heaven. But to know Her well, each one must individually establish the relationship of a child with its loving Mother. For this purpose She asks for our personal and effective consecration to Her Immaculate Heart. The child of Mary turns to Her constantly for counsel, force and courage, gentleness and humility in the affairs of daily life. Many prayers of consecration to Mary exist, in particular that of Montfort; but one may use any simple formula such as the following: Blessed and beloved Mother, I am Your child and I wish to belong to You; I give and consecrate myself forever to Your Immaculate Heart, renewing in Your hands my baptismal promises, and I ask You to ratify my filial homage to Your Immaculate Heart — that of my person and my activities, my temporal and spiritual goods, my resolution to have frequent recourse to Your maternal and merciful intercession. And, insofar as it is within my scope to do so, I offer You also my family, my homeland and all of humanity.