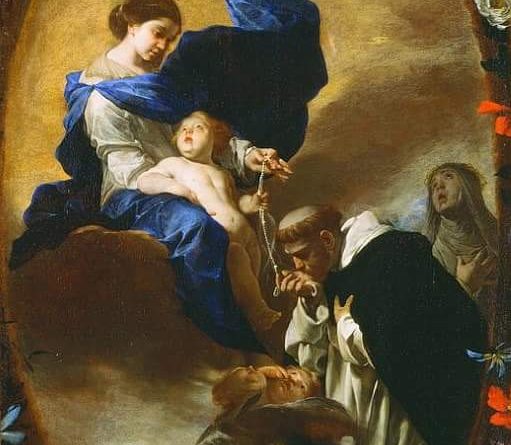 While St. Dominic was preaching the Rosary in Carcassone, a heretic made fun of his miracles and the fifteen mysteries of the Rosary, and this prevented other heretics from being converted. As a punishment God allowed fifteen thousand devils to enter the man’s body. His parents took him to Father Dominic to be delivered from the evil spirits. He started to pray and he begged everyone who was there to say the Rosary out loud with him, and at each Hail Mary our Lady drove a hundred devils out of the man, and they came out in the form of red-hot coals. After he had been delivered, he abjured his former errors, was converted and joined the Rosary Confraternity. Several of his associates did the same, having been greatly moved by his punishment and by the power of the Rosary. The learned Franciscan, Carthagena, as well as several other authors, says that an extraordinary event took place in 1482. The venerable Fr. James Sprenger and the religious of his order were zealously working to re-establish devotion to the Rosary and its Confraternity in the city of Cologne. Unfortunately, two priests who were famous for their preaching ability were jealous of the great influence they were exerting through preaching the Rosary. These two Fathers spoke against this devotion whenever they had a chance, and as they were very eloquent and had a great reputation, they persuaded many people not to join the Confraternity. One of them, the better to achieve his wicked end, wrote a special sermon against the Rosary and planned to give it the following Sunday. But when the time came for the sermon he did not appear and, after a certain amount of waiting, someone went to fetch him. He was found to be dead, and he had evidently died without anyone to help him. After persuading himself that this death was due to natural causes, the other priest decided to carry out his friend’s plan and give a similar sermon on another day, hoping to put an end to the Confraternity of the Rosary. However, when the day came for him to preach and it was time to give the sermon, God punished him by striking him down with paralysis which deprived him of the use of his limbs and of his power of speech. At last he admitted his fault and that of his friend and in his heart he silently besought our Lady to help him. He promised that if only she would cure him, he would preach the Rosary with as much zeal as that with which he had formerly fought against it. For this end he implored her to restore his health and his speech, which she did, and finding himself instantaneously cured he rose up like another Saul, a persecutor turned defender of the holy Rosary. He publicly acknowledged his former error and ever afterwards preached the wonders of the Rosary with great zeal and eloquence.