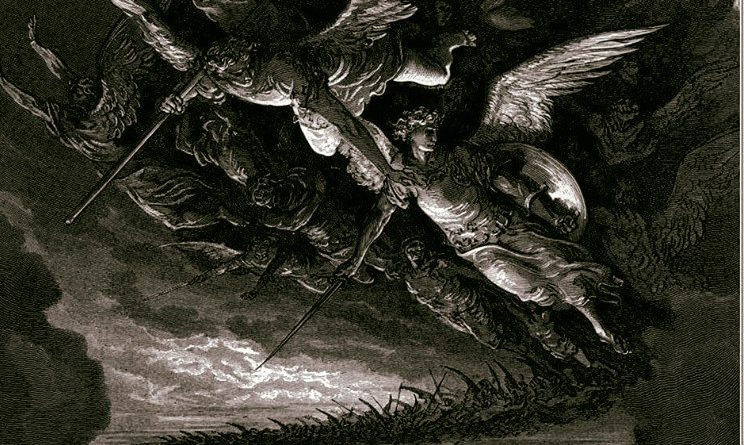 While one-third of the angels sinned, the other two-thirds persevered in grace. One-third of the fallen angels is in Hell tormenting the condemned souls. These devils are the ones who freely followed Lucifer and deliberately revolted against God. They cannot leave the abyss except with the special acquiescence of God, when He decides to punish the sins of men with a great calamity. These are the worst among the devils.
.
The other two-thirds of the fallen angels inhabit the air and the earth. They are the ones who did not take a side in the battle between Lucifer and God, but remained silent.
.
The devils of the air often instigate storms, winds and thunders to frighten souls, causing their wills to weaken and cede to inconstancy, thus preparing them to falter in the Faith and to doubt Divine Providence. The devils who live on earth among men to tempt us are the fallen angels of the lowest choir. The faithful angels of this choir are our guardian angels.
.
The prince and chief of all devils is Lucifer, who is confined at the bottom of the abyss, where he punishes the other devils and the condemned men and women. Since he fell from the highest place among the angels, the Seraphic choir, he became the worst devil. His characteristic vice is pride.
.
Below him and under his power are three other princes: First, Asmodeu, who represents the vice of impurity and was the head of the Cherubim; second, Mammon, who represents the vice of avarice and was the first among the Thrones; third, Belzebuth, who represents idolatry, sorcery and spells and was the chief of the Dominations. He is over everything that is dark and that diffuses darkness over rational creatures.