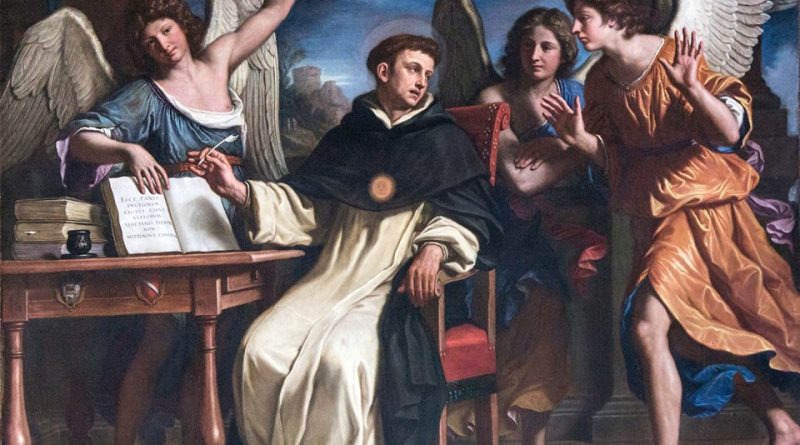 ST. Thomas Aquinas, was wont to demand three things of Almighty God with great Instance: The first was force to serve Him without ever relenting in that first Primitive fervour wherewith he had undertaken His service. The second, that He would be pleased to keep Him always in the humble and poor condition of a Religi­ous state, which He had made profession of. And the third was, that He would reveal unto him, what state his Brother Arnold was in, whom the Emperour Conrade had put to death, because he stuck to the Party of the Church. All which three things our Lord granted him in ample manner. For He gave him Grace to persevere in His service until death in his Religious Order, with great sanctity; and He revealed unto him in a Vision, that his Brother was in the state of Salvation; our Lord recompencing the Death which he was put unto for his Service and for the Defence of the Church. His Sister, that had taken a Religious Course, appeared once unto him, whilst he was praying, and told him, that she was in Purgatory, demanding the Assistance of his Sacrifices and other Prayers. The Saint was very careful to help her with Masses, Fastings, Prayers, both by himself and by other Religious Men. And few days after, she appeared again to thank him for the benefit he had procu­red unto her, for that she was now in Glory. St. Thomas asked her, of the condition of his two Brothers, and of his own state, Whether it were good in the presence of God? She answered, That their Brother Landulfe was in Purgatory, and Arnold was at rest; and that for what concerned himself, he was in the Grace of God, and that shortly they should all of them meet together, but he should be far higher in glory, for his good Service and Pains taken in the Church. Moreover, at another time, when he was one Night praying in the Church of his Convent, at Naples, Fryar Romanus, who succeeded him in the Chair of Divinity in France, being lately deceased, appeared unto him, St. Thomas ha­ving yet understood nothing of his death; after that he knew him, and was told by him, that he was departed out of this World, he inquired of him, Whether his Services were acceptable unto God, and if he were in the state of Grace? Romanus bid him, go on and persevere in the state he was in, for it was very good, and God was well pleased with it. Then St. Thomas asked Romanus, how all things went with him, and where he was? To whom he replied, that he was now in Heaven; but had been fifteen days in Purgatory for a neglect which he had committed in the Execution of the Bishop of Paris his Will, in a Matter which ought to have been performed out of hand, and was delayed by his fault. Some other things did St. Thomas ask him, and was satisfied in them all, after which Romanus vanished, leaving him in great comfort and consolation. For when God will reveal some secrets unto His servants, He useth first to give them a Desire, and moveth them by His Holy In­spirations for to demand them of Him, giving them an assured confidence of obtaining what they ask: upon which Ground they walk securely, which they could not do, if that Divine Motion were wanting, and if through a vain curiosity they did pretend to know the se­cret Judgments of our Lord, and the state of Souls departed out of this Life: as many times it falleth out.
(Taken From Father Peter Ribadeneyra’s Flowers of the Lives of the Saints)