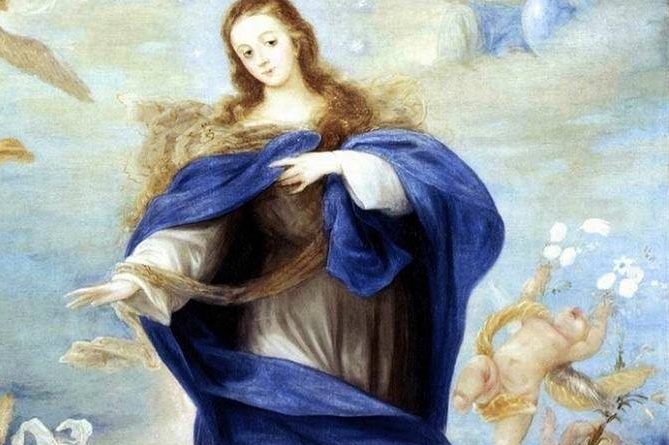 An Anti-Egalitarian Dogma
.
This dogma teaches that Our Lady was immaculate at her conception, meaning that, at no moment, did she have even the slightest stain of Original Sin. Both she, and naturally Our Lord Jesus Christ, were exempt from that rigid law that subjugates all other descendants of Adam and Eve.
.
Thus, Our Lady was not subject to the miseries of fallen man. She did not have bad influences, inclinations and tendencies. In her, everything moved harmonically towards truth, goodness and therefore God. In this sense, Our Lady is an example of perfect liberty, meaning that everything her reason, illuminated by Faith, determined as good, her will desired entirely. She had no interior obstacles to impede her practice of virtue.
.
Being “full of grace” increased these effects. Thus, her will advanced with an unimaginable impetus towards everything that was true and good.
.
Declaring that a mere human creature had this extraordinary privilege makes this dogma fundamentally anti-egalitarian, because it points out an enormous inequality in the work of God. It demonstrates the total superiority of Our Lady over all other beings. Thus, its proclamation made Revolutionary egalitarian spirits boil with hatred.
.
SECOND REASON:
.
The Unsullied Purity of Our Lady
.
However, there is a more profound reason why the Revolution hates this dogma.
.
The Revolution loves evil and is in harmony with those who are bad, and thus tries to find evil in everything. On the contrary, those who are irreproachable are a cause of intense hatred. Therefore, the idea that a being could be utterly spotless from the first moment of her existence is abhorrent to Revolutionaries.
.
For example: Imagine a man who is consumed with impurity. When besieged by impure inclinations, he is ashamed of his consent to them. This leaves him depressed and utterly devastated.
.
Imagine this man considering Our Lady, who, being the personification of transcendental purity, did not have even the least appetite for lust. He feels hatred and scorn because her virtue smashes his pride.
.
Furthermore, by declaring Our Lady to be so free from pride, sensuality and the desire for anything Revolutionary, the proclamation of the Immaculate Conception affirmed that she was utterly Counter-Revolutionary. This only inflamed the Revolutionary hatred of the dogma all the more.
.
Disputing the Doctrine: A Counter-Revolutionary Struggle
.
For centuries, there were two opposing currents of thought about the Immaculate Conception in the Church. While it would be an exaggeration to suggest that everyone who fought against the doctrine was acting with Revolutionary intentions; it is a fact that all those who were acting with Revolutionary intentions fought against it. On the other hand, all those who favored its proclamation, at least on that point, expressed a Counter-Revolutionary attitude.
.
Thus, in some way the fight between the Revolution and Counter-Revolution was present in the fight between these two theological currents.
.
THIRD REASON:
.
The Exercise of Papal Infallibility
.
There is still another reason this dogma is hateful to Revolutionaries: it was the first dogma proclaimed through Papal Infallibility.
At that time, the dogma of Papal Infallibility had not yet been defined and there was a current in the Church maintaining that the Pope was only infallible when presiding over a council. Nevertheless, Pius IX invoked Papal Infallibility when he defined the Immaculate Conception after merely consulting some theologians and bishops.
.
For liberal theologians, this seemed like circular reasoning. If his infallibility had not been defined, how could he use it? On the contrary, by using his infallibility, he affirmed that he had it.
.
This daring affirmation provoked an explosion of indignation among Revolutionaries, but enormous enthusiasm among Counter-Revolutionaries. In praise of the new dogma, children all over the world were baptized under the name: Conception, Concepcion or Concepta to consecrate them to the Immaculate Conception of Our Lady.
.
Pius IX: Bringing the Fight to the Enemy
.
It is not surprising that Pius IX so adamantly affirmed Papal Infallibility. Very different from those who succeeded him, he was ever ready to bring the fight to the enemy. He did this in Geneva, Switzerland, which then was the breeding ground of Calvinism, which is the most radical form of Protestantism.
.
When Swiss laws changed to allow a Catholic cathedral in Geneva, Pius IX ordered that a statue of the Immaculate Conception be placed in the middle of the city, to proclaim this dogma in the place where Calvinists, Lutherans and other Protestants denied it more than anywhere else. This is an example of Pius IX’s leadership in the fight against the Revolution.
.
It is therefore entirely proper that all Catholics entertain a special affection for the dogma of the Immaculate Conception, which is so detested by the enemies of the Church today.