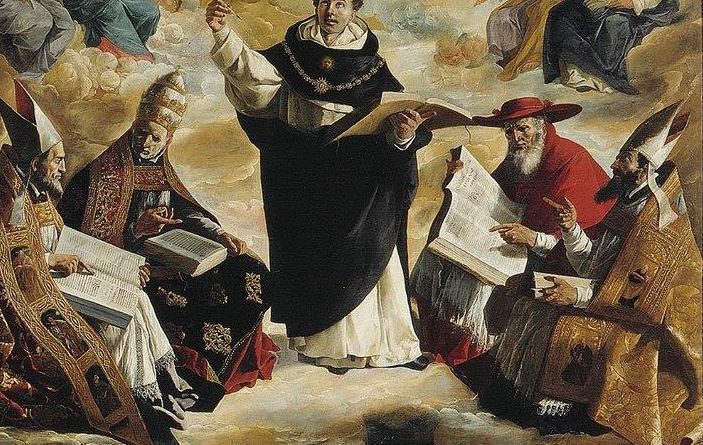 Patronage: academics, against storms, against lightning, apologists, book sellers, Catholic academies, Catholic schools (proclaimed on 4 August 1880 by Pope Leo XIII, Catholic universities, chastity, colleges, learning, pencil makers, philosophers, publishers, scholars, schools, students, theologians, universities
.
The great Saint Thomas was born of noble parents at Aquino near Naples in Italy, in 1225; his century was replete with great names and Christian works, yet he dominates it by the power of his thought and the perfection of his works. In his childhood he was the provider for the poor of the neighborhood during a famine; his father, meeting him in a corridor with the food he had succeeded in taking from the kitchen, asked him what he had under his cloak; he opened it and fresh roses fell on the ground. The nobleman embraced his son and amid his tears, gave him permission to follow thereafter all inspirations of his charity.
.
The young student, like the holy man Job, made a pact with his eyes and forbade them to see anything which might favor in his heart any desires for a life of ease. At the University of Naples he led a retired life of study and prayer, and continued his charities, giving all he had which was superfluous. He was recognized already by his professors as a genius, but it was Saint Albert the Great who later said of his disciple whom some called the mute ox, that some day the lowing of this ox will resound throughout the entire world.
.
At the age of seventeen he received the Dominican habit at Naples. His family opposed this choice, and he was set upon by his brothers on his way to Paris. They attempted in vain to remove his holy habit, but he was taken in custody and obliged to suffer a two years’ captivity in their castle of Rocca Secca. Neither the caresses of his mother and sisters, nor the threats and stratagems of his brothers, could shake him in his vocation. His older sister was won over by him and renounced a brilliant marriage to embrace religious life; later she was Abbess of her convent in Capua.
.
While Saint Thomas was in confinement at Rocca Secca, his brothers endeavored to entrap him into sin, but the attempt only ended in the triumph of his purity. Snatching from the hearth a burning coal, the Saint drove from his chamber the courtesan whom they had concealed there. Then marking a cross upon the wall, he knelt down to pray. Immediately, while he was rapt in ecstasy, an Angel girded him with a cord, in token of the gift of perpetual chastity which God had given him. The pain caused by the girdle was so sharp that Saint Thomas uttered a piercing cry, which brought his guards into the room. But he never related this grace to anyone save Father Raynald, his confessor, a short time before his death. Thus originated the Confraternity of theAngelic Warfare, for the preservation of the virtue of chastity.
.
Having at length escaped, Saint Thomas went to Cologne to study under Blessed Albert the Great, and afterwards was sent with him to Paris, where for several years he taught philosophy and theology. The Church has ever venerated his numerous writings as a treasure of sacred doctrine; in naming him the Angelic Doctor she has indicated that his science is more divine than human. The rarest gifts of intellect were combined in him with the most tender piety. Prayer, he said, had taught him more than study. His singular devotion to the Blessed Sacrament shines forth in the Office and hymns which he composed for the feast of Corpus Christi. To the words miraculously uttered by a crucifix at Naples, Well hast thou written concerning Me, Thomas. What shall I give thee as a reward? he replied, Naught save Thyself, O Lord. Saint Thomas was loved for his unfailing gentleness and his readiness to lend his services or great lights to all who sought them. He died at Fossa Nuova in 1274, on his way to the General Council of Lyons, to which Pope Gregory X had summoned him.
.
Reflection. The knowledge of God is for all, but hidden treasures are reserved for those who have ever followed the Lamb.
.
Prayer to Venerate Any Saint
.
Saint Saint Thomas Aquinas: Feast Day March 7
.
Rev. 8:3-4 [3] And another angel came, and stood before the altar, having a golden censer; and there was given to him much incense, that he should offer of the prayers of all saints upon the golden altar, which is before the throne of God. [4] And the smoke of the incense of the prayers of the saints ascended up before God from the hand of the angel.
.
ETERNAL Father, I wish to honor St. (Name), and I give You thanks for all the graces You have bestowed upon him (her). I ask You to please increase grace in my soul through the merits of this saint, and I commit the end of my life to him (her) by this special prayer, so that by virtue of Your goodness and promise, St. (Name) might be my advocate and provide whatever is needed at that hour. Amen.
.
PROMISE: “When you wish to honor any particular saint and give Me thanks for all the graces I have bestowed on that saint, I increase grace in your soul through the merits of that saint. When you commit the end of your life to any of the saints by special prayers, I appoint those saints to be your advocates and to provide whatever you need at that hour.”-Our Lord to St. Gertrude
.
Blessed Anne Catherine Emmerich revealed in her Visions that saints are particularly powerful on their feast days and should be invoked then.