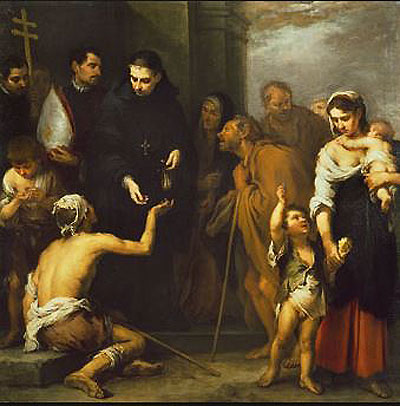 Saint Thomas, the glory of the Spanish Church in the sixteenth century, was born in the diocese of Toledo in 1488. His mother was a Christian of extraordinary tenderness for the poor. God worked a miracle for her one day, when her servants had given away absolutely all the flour in their storeroom. When another beggar came to the door, she told them to go back once more and look again, and they found the storeroom filled with flour. Her little son followed his mother’s example, and one day gave away, to six poor persons in succession, the six young chicks which had been following the hen around in the yard. When his mother asked where they were, he said, You didn’t leave any bread in the house, Mama, so I gave them the chicks! I would have given the hen if another beggar had come.

At the age of fifteen years he began his studies and succeeded so well he was judged fit to teach philosophy and theology in a college of Alcala, and then at Salamanca. When his father died he returned to Villanova to dispose of his patrimony. He made his house into a hospital, keeping only what was needed for his mother, and gave the rest to the poor. At the age of twenty-eight he entered the Order of the Hermits of Saint Augustine at Salamanca, becoming professed in 1517.
.
When ordained a priest three years later, he continued his teaching of theology, but also began to preach so remarkably well that he was compared with Saint Paul and the prophet Elias. The city was reformed, and after the Emperor Charles V heard him once, he returned and often mingled with the crowd to listen, finally making Saint Thomas his official preacher.
.
He became Prior of his Order in three cities, then three times a Provincial Superior. His sanctity continued to increase, and he was nominated archbishop of Valencia in 1544; he had refused a similar offer sixteen years earlier, but this time was obliged to accept. After a long drought, rain fell on the day he assumed his new office. He arrived as a pilgrim accompanied by one fellow monk, and was not recognized in the convent of his Order when the two travelers came asking for shelter during the rain. He was obliged to reveal his identity when the Prior, who wondered where the awaited archbishop might be, asked him if perchance it was he.
.
The new Archbishop was so poor that he was given money for furnishings, but he took it to the hospital for the indigent. On being led to his throne in church, he pushed the silken cushions aside, and with tears kissed the ground. His first visit was to the prison. Two-thirds of his episcopal revenues were annually spent in alms. He daily fed five hundred needy persons, made himself responsible for the bringing up of the city’s orphans, and sheltered neglected foundlings with a mother’s care. During his eleven years’ episcopate, not one poor maiden was married without an alms from the archbishop. Spurred by his example, the rich and the selfish became liberal and generous. And when, on the Nativity of Our Lady, 1555, after one week of illness, Saint Thomas was about to breathe his last, he gave his bed to a poor man and asked to be placed on the floor. It has been said that at his death he was probably the only poor man in his see.
.
Reflection: When a refractory priest had not heeded his bishop’s remonstrances, Saint Thomas took him into a room apart, uncovered his shoulders and knelt before his crucifix, saying: My brother, my sins are the reason you have not changed your life and listened to my warnings. It is just for me to bear the penalty of my fault. And he scourged himself cruelly. This frequent practice brought many to tears and reform of their lives. In this way a perfect Pastor inspired his entire flock with truly Christian sentiments.
.
Prayer to Venerate Any Saint
.
Saint Thomas of Villanova: Feast Day September 22
.
I desire therefore, first of all, that supplications, prayers, intercessions, and thanksgivings be made for all men: For kings, and for all that are in high station: that we may lead a quiet and a peaceable life in all piety and chastity. For this is good and acceptable in the sight of God our Saviour, Who will have all men to be saved, and to come to the knowledge of the truth.
(1 Timothy 2:1-4)
.
And another angel came, and stood before the altar, having a golden censer; and there was given to him much incense, that he should offer of the prayers of all saints upon the golden altar, which is before the throne of God. And the smoke of the incense of the prayers of the saints ascended up before God from the hand of the angel.
(Rev. 8:3-4)
.
ETERNAL Father, I wish to honor St. (Name), and I give Thee thanks for all the graces Thou has bestowed upon him (her). I ask Thee to please increase grace in my soul through the merits of this saint, and I commit the end of my life to him (her) by this special prayer, so that by virtue of Thy goodness and promise, St. (Name) might be my advocate and provide whatever is needed at that hour. Amen.
.
PROMISE: “When you wish to honor any particular saint and give Me thanks for all the graces I have bestowed on that saint, I increase grace in your soul through the merits of that saint. When you commit the end of your life to any of the saints by special prayers, I appoint those saints to be your advocates and to provide whatever you need at that hour.”-Our Lord to St. Gertrude
.
Blessed Anne Catherine Emmerich revealed in her Visions that saints are particularly powerful on their feast days and should be invoked then.